Shamrock Rovers slipped eight points behind champions Dundalk before over 5,000 enthralled supporters in Tallaght and will wonder how so much continues to go so badly against them in big league games.

Sean Gannon, the player of the month for May, provided the only goal but Dundalk will accept that they can and will play a great deal better than this as the season progresses.

Rovers will feel deeply frustrated as a key decision went against them, while Dundalk can now begin to focus on their European campaign with such a gap built up over their Dublin rivals as to warrant one eye on Europe.

This was not a classic but it was always absorbing and, having been so far behind the Hoops earlier in the campaign, Dundalk can go home very happy this evening, along with their large band of boisterous fans.

Robbie Benson returned to the bench for the Louthmen, having missed almost the entire season so far with a serious ankle ligament injury. Sean Murray started in midfield for the champions, with Shamrock Rovers dropping Aaron Greene and starting Dan Carr up top.

Jack Byrne was predictably busy and was heavily involved on five minutes after thieving Murray of possession, later hooking wide after the Lilywhites failed to clear.

The first 20 minutes were scrappy and pretty much riddled with incidences of pressing from the opposition forcing sloppy passes. Rovers were growing in confidence, that said, and Dundalk's defence looked a bit vulnerable to balls in behind to Carr, probably by Byrne.

Spicy tackles abounded, Trevor Clarke and John Mountney both carded. Byrne, however, clearly looked for a foul outside the box on 25 minutes and was rightly booked by Rob Harvey.

Dundalk were outplayed but fashioned a bit of a chance with ten minutes remaining in the half, Gannon skying his shot after being set up by Michael Duffy, the right-back for whatever reason then remonstrating with Patrick Hoban.

What followed was the best chance of the half, Massey brilliantly blocking the ball off the line after Carr was put through and squared to Ronan Finn. From the corner, Joey O'Brien's goal-bound header was blocked by none other than Finn, who was growing into the game. 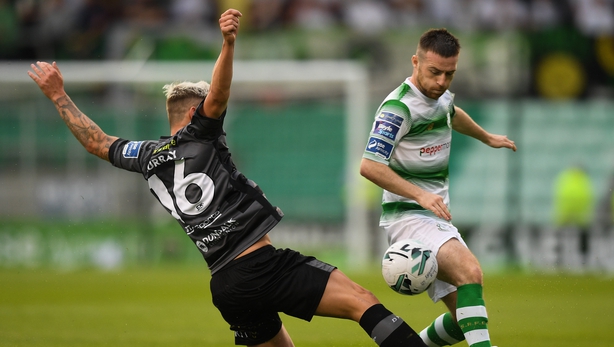 The moment of the half came on 38 minutes. Picking up the ball near the Dundalk dugout, Byrne ran at a struggling Murray and, finding space, unleashed a world-class strike that crashed off the crossbar.

Dundalk had a hell of a shout for a penalty when Gannon's cross hit Sean Kavanagh's hand and replays showed it was clear Rovers – who have given away three penalties against Bohemians alone this season – were very much let off the hook here as the interval approached.

Dundalk predictably emerged a much livelier side after the break and bossed the first ten minutes. Murray was now playing much better and Rovers struggled to get on the ball.

The main controversy in the game surrounded Harvey's decision after an hour's play not to send off Gary Rogers, who lost the battle to win the ball before Clarke, Sean Hoare having given away possession sloppily. It was cruel on Rovers and the inevitable followed.

The goal came on 73 minutes. Substitute Jamie McGrath waited cleverly before slipping Gannon in and his shot crept in at the back post. Key to the goal was a piece of genius from Patrick McEleney, selling two Rovers players with a superb disguised header in the build-up.

The champions now started to run things and both Mountney and Gannon sought a second goal.

Dundalk introduced Benson with ten minutes to go and very nearly doubled their lead, Greg Bolger robbed of possession and Hoban driving low but Alan Mannus got down to save.

Rovers had a huge chance to equalise with six minutes left but substitute Aaron Greene, who has struggled in front of goal all season, blasted miles over the bar in front of his own fans. Five minutes later, Greene dragged wide after superb play by Byrne and another sub, Brandon Kavanagh.

It was breathless stuff now, McEleney found by McGrath but driving wide. The impressive Brandon Kavanagh, teed up by a Lee Grace header, was also unable to get his shot on target in the 90th minute.

One last chance came Greene's way but he miss-controlled and that was it. That is probably it for the title race too.

Magical day for O'Brien with 1-2-3 in Champion Stakes