Sam Kerr scored four goals as Australia beat Jamaica to finish second in Group C and book their place in the last 16 of the Women's World Cup.

Up next for them is a date with Norway.

The 25-year-old Chicago Red Stars forward scored her second goal in three games when she broke the deadlock in the 11th minute before netting again before the break and again to seal her hat-trick in the 69th minute.

Kerr added her fourth in the 83rd minute as Australia headed for the knockout stages as she moved level with United States' Alex Morgan as the top-scorer at this World Cup with five goals.

Four goals for Sam Kerr as Australia march into the last 16 of the World Cup with a 4-1 victory over Jamaica #WWC2019 #FIFAWWC pic.twitter.com/j8TZ9v5iEE

Australia skipper Kerr saw Jamaica goalkeeper Nicole McClure off her line and looped in a header after an inch-perfect cross from the left with 11 minutes on the clock.

Kerr kept up her prolific form when she nodded in the second after a simple ball was sent in from the right in the 41st minute.

Jamaica pulled one back - their first-ever goal at a Women's World Cup - when half-time substitute Havana Solaun coolly rounded the goalkeeper to roll the ball into the corner four minutes into the second half.

Khadija Shaw went close for the Reggae Girlz in the 54th minute but her strike flew over the crossbar. Shaw went close again 10 minutes later, evading two challenges before drilling a long-range strike which again rose over the bar.

However, it was Australia who found the net again and Kerr who claimed her hat-trick in the 69th minute.

Kerr had a penalty shout turned down by VAR as the match entered its last 10 minutes but added her fourth in the 83rd minute when McClure panicked and kicked the air instead of the ball when attempting a clearance. 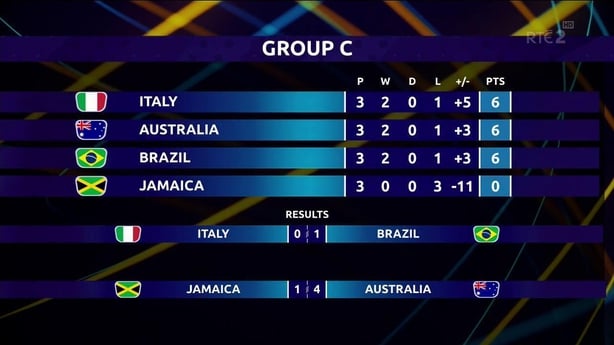 "At the time I didn't know how important it was but we knew every goal would count and I wanted more than that in my own selfish way. I'm happy we could get that second spot," Kerr said in the post-match press conference broadcast on FIFATV.

When asked about the nature of her first two headed goals, despite her diminutive stature, the 25-year-old added: "I guess I grew up watching Timmy Cahill. I practice it a lot but I'm also gifted and they're my favourite kind of goals so I'm stoked."

Australia will now face Norway in the round of 16 and coach Ante Milicic said: "In the end, we won, convincingly, come second in a very difficult group and move forwards.

"Now we rest and recover and go forward to a difficult game against Norway."