Spain and China played out a goalless draw in their Women's World Cup clash in Le Harve - with both sides securing progression into the last 16 as a result.

With a point enough to qualify both nations out of Group B alongside leaders Germany, it was Spain who had the better of the chances as the game ended 0-0.

A share of the spoils saw Jorge Vilda's Spain finish as runners-up and China progress as one of the four third-placed sides with the best record. 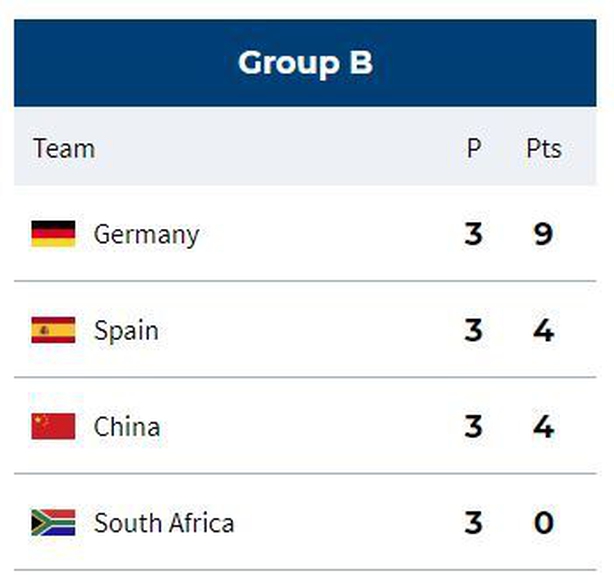 Spain dominated possession and crafted enough opportunities to win the game but were kept out by a defiant Chinese defensive effort.

Lucia Garcia came close with an early strike wide of the post before a rare mistake in the China backline allowed Jenni Hermoso to get in a free header which was cleared off the line.

Nahikari Garcia also passed up a decent chance after being slipped through but it was in the closing stages where Spain nearly scored a winner.

China goalkeeper Peng Shimeng, who had almost cost her side a goal earlier in the contest after steaming off her line, made a great save to deny Patri Guijarro with just six minutes left on the clock.

With Germany topping the group following three wins out of three, Spain advance in second place and will meet the United States or Sweden next Monday in Reims.

China boss Jia Xiguan said after the game that he is aware there is a gap between China and the elite sides challenging for the title in France but was happy with the application of his players.

"They have played really well," he said. "To build a strong team, it needs generations, it cannot just be done over one generation.

"Also we see the gap between us and the world-class teams. It's very difficult, no matter who our opponents are.

"We need to put 200 per cent of our efforts in and we need to do it in a concerted way.

"Although it was a draw, we got one point which means we have the opportunity to continue to the next level. That's why I'm so touched by our players' efforts and by the spirit."

Spain coach Vilda credits a narrow loss to the USA - the reigning world champions, - in a January friendly for showing his side how they needed to operate against the top teams.

"Playing against (the United States) for the first time made us understand what playing against such fast players with great technique within a well-learned system would mean," he said. "This is something we've studied.

"This is a game where any small detail can change things so we're going to look at what we've done and try and correct our mistakes and try to call on our strengths in the run up to the game. So we'll try and do what we do best."