Harry Redknapp has revealed it would be a "major surprise" if Frank Lampard did not take over as Chelsea manager after Maurizio Sarri's move to Juventus.

Lampard, who turns 41 on 20 June, enjoyed a hugely successful spell as a player for the Blues, becoming the club's record goalscorer and winning three Premier League titles as well as the Champions League.

The former England midfielder impressed during his first campaign in management at Derby, guiding the Rams to sixth place in the Sky Bet Championship and then onto the play-off final at Wembley.

Despite Derby looking to tie down Lampard's future, he remains the overwhelming favourite to take over at Stamford Bridge.

Redknapp, though, suggested it appeared only a matter of time before his nephew was set for the Chelsea dugout.

"I think it would be a major surprise if he doesn't get the job. It looks to me as though it will happen," Redknapp said.

"It would be brilliant for him. A shame for Derby as (owner) Mel Morris gave him the opportunity there and he's done a great job. But it's a great move; he's absolutely idolised at Chelsea - a genuine legend there.

Moving for such a rookie coach would be a bold appointment by Chelsea and a big step for Lampard, but it would be a hugely popular move with supporters. 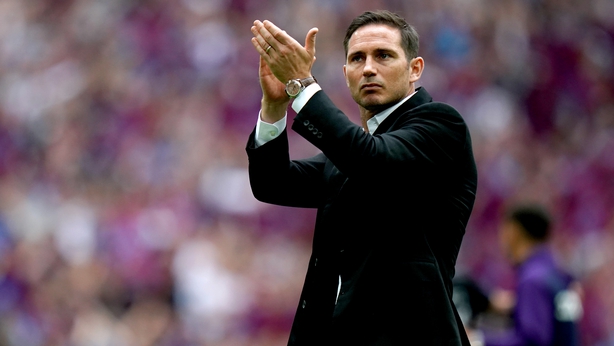 "There's no change in the situation at present, except for the fact that Chelsea no longer have a manager," Morris told Sky Sports.

"We have made it clear to everyone, but most importantly to Frank, that we want him and to retain his services for the long term.

"If Chelsea want to hire Frank, then it is in their gift to make an offer in pursuit of that.

"In the meantime, we will continue to put our best foot forward to continue with our plans for the coming season, to work with Frank for him to know how much he is wanted by everyone associated with the club."

Lampard is reported to have already told Derby he would be interested in talking to Chelsea if an approach was made.

Chelsea saw playmaker Eden Hazard depart for Real Madrid and have appealed against their two-window transfer ban at the Court of Arbitration for Sport.

Whatever team the new Blues boss is able to assemble for next season, Redknapp believes they can compete.

"He (Lampard) has a squad there that for sure will finish top six," said Redknapp, who also had spells at Portsmouth, Tottenham and QPR.

"I see them next season finishing, at best, third, probably fourth; around where they were last season.

"But it's going to be tougher as they've lost their best player, but it might be a great opportunity to give these kids a game.

"Tammy Abraham has been out on loan at Aston Villa and did fantastic in the Championship. The boy (Mason) Mount (who) Frank had at Derby - let's see them play."

Sarri's successor will be the 14th different manager employed at Chelsea since owner Roman Abramovich took over in 2003.

The 60-year-old Italian was in the position for just one year after succeeding countryman Antonio Conte last summer.

He guided the team to Europa League success, third place in the Premier League and the Carabao Cup final.

But the former investment banker failed to win over all Chelsea fans, with frustration at his regimented tactics and an apparent reluctance to play homegrown talents Ruben Loftus-Cheek and Callum Hudson-Odoi.

Form was also inconsistent at times and, with Sarri hankering after a return to Italy, the club decided not to stand in his way when Juventus expressed an interest.

A compensation package understood to be in excess of £5 million was agreed with the Serie A champions.
In a statement confirming his departure, Chelsea added a message to congratulate Sarri "on securing the role as big as any in Serie A and to wish him the best of luck for the future".