The Republic of Ireland Under-21s fell to a 2-0 loss against a high-quality Brazil at Stade de Lattre-de-Tassigny in the semi-finals of the Toulon Tournament on Wednesday afternoon.

The Samba Boys threatened to run riot after they won a penalty just three minutes in but Douglas Luiz slammed the spot-kick wide.

They did break the deadlock on 15 minutes when Paulinho hammered it past Caoimhin Kelleher from the edge of the box but Ireland grew in stature as the half wore on.

Connor Ronan volleyed over Ireland's best chance of the half three minutes before the break.

However, a soft Matheus Cunha effort, that dribbled past the unsighted Kelleher, effectively killed the contest two minutes into the second period, and though the Irish toiled manfully in the heat of southern France, they never threatened to pull off a comeback. 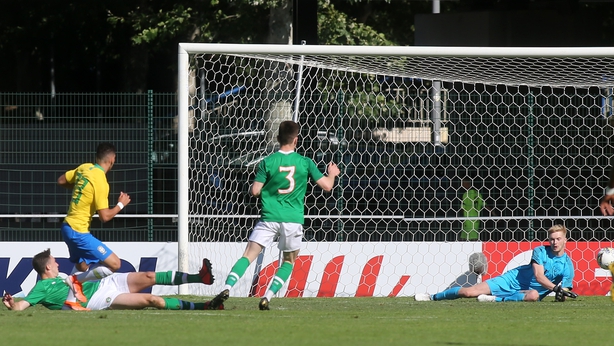 Ireland will now play Mexico in the third-place play-off on Saturday, while Brazill will face Japan in the decider.

"The players can be really proud of their efforts today," said boss Stephen Kenny afterwards.

"Brazil are looking to retain their Olympic gold medal in Tokyo and this is the team who will be looking to do that.

"But we caused them problems and continued to battle but also looked to play. I thought our back four were magnificent and every one of the players gave everything for the cause.

"When you consider the amount of minutes our team have played in such a short amount of time whilst Brazil were able to field their second string in their final group game and effectively had a week off, it was always going to be difficult for us.

"We want to finish on a high though, this has been a fantastic tournament so far so we look forward to the Mexico game on Saturday where we'll be looking to seal third spot in the tournament."