France returned to the top of Euro 2020 qualifying Group H with a 4-0 win in Andorra.

Kylian Mbappe put France, who had been beaten by Turkey in their last match, ahead in the 11th minute, with Wissam Ben Yedder adding a second on the half-hour mark.

Florian Thauvin made it 3-0 just before half-time and Chelsea centre-back Kurt Zouma wrapped up a comfortable win on the hour.

Sigurdsson headed the home side in front in the 21st minute following a free-kick and then nodded in from close range on 10 minutes later.

Turkey pulled a goal back through Dorukhan Tokoz from a corner five minutes before half-time but Iceland closed out victory to move level on nine points with the top two.

Paddy McNair's late goal gave Northern Ireland a 1-0 win in Belarus to maintain their 100 per cent start from four matches at the top of Group C.

Germany ran out 8-0 winners over Estonia in Mainz to make it three wins from three qualifying games.
Marco Reus, Serge Gnabry and Leon Goretzka were all on target in the opening 20 minutes.

Manchester City midfielder Ilkay Gundogan made it 4-0 from the penalty spot, with Reus adding another ahead of the break.

It remained one-way traffic in the second half, Gnabry grabbing another just after the hour, before substitute Timo Werner and Manchester City winger Leroy Sane scored.

Mate Patkai's goal with 10 minutes left gave Hungary a 1-0 win over Wales in Budapest to keep them clear at the top of Group E. 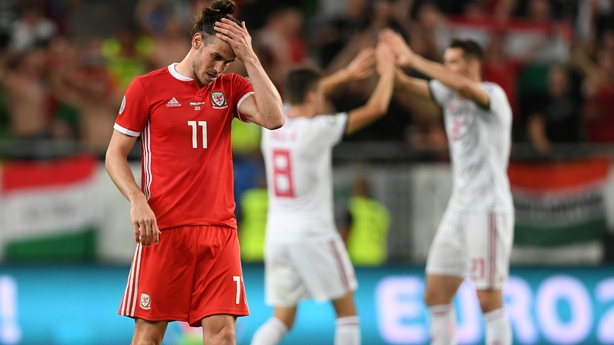 Captain Marek Hamsik scored twice as Slovakia ran out 5-1 winners away to Azerbaijan to move above Croatia into second.

Stanislav Lobotka put the visitors ahead with a 20-yard effort in the eighth minute and a free-kick from Juraj Kucka doubled the lead.

Ramil Sheydayev swiftly pulled a goal back for Azerbaijan, but Hamsik, who joined Chinese club Dalian Yifang from Napoli in February, added a third on the half-hour.

Hamsik made it 4-1 in the 57th minute with defender David Hancko wrapping things up with five minutes left.
In Group I, Romelu Lukaku scored twice as leaders Belgium beat Scotland 3-0 in Brussels.

The Manchester United forward headed in from close range just before half-time, and added another in the 57th minute.

Manchester City midfielder Kevin De Bruyne drilled home a low shot from the edge of the box in stoppage time.

Marco Verratti's late goal saw Italy come from behind to beat Bosnia and Herzegovina 2-1 in Turin to make it four wins out of four in Group J.

Edin Dzeko had fired the visitors into the lead in the 32nd minute.

Lorenzo Insigne, though, equalised at the start of the second half following a corner.

Napoli frontman Insigne then turned provider to set up Verratti, who lashed home a cross from the left in the 85th minute.

Norwich striker Teemu Pukki was on target as Finland won 2-0 in Liechtenstein.

Pukki broke the deadlock in the 37th minute. Benjamin Kallman scored a second just before the hour as Finland consolidated second place.

Armenia, meanwhile, battled to a 3-2 win in Greece for a second successive qualifying victory.