Seán Cox toasted Liverpool's Champions League success surrounded by his family in his home in Co Meath after being discharged from the National Rehabilitation Hospital to watch the big game on Saturday night.

Cox suffered dreadful injuries in an unprovoked attack just over a year ago before the Reds' game against Roma at Anfield.

In February, a 30-year-old Italian man was jailed for three and a half years for the assault, with another Roma fan sentenced to three years for violent disorder.

It's been a long, tough road to recovery for Cox and his family.

Last night was a special night for the lifelong Liverpool fan, who was discharged from hospital for the evening.

"On Seán’s behalf, I want to offer our heartfelt congratulations to Liverpool Football Club on winning the Champions League," Seán's wife Martina Cox said on Sunday.

"The club and its fans have taken Seán, our family and I, into their hearts since Seán’s attack last year. Nobody could be happier than the Cox family for Jurgen Klopp, his players and the wonderful Liverpool fans.

"Seán watched the game with us at home, proudly wearing a signed Liverpool jersey sent to him by the club's CEO Peter Moore last week.

"He was overjoyed when the final whistle blew and Liverpool were crowned champions." 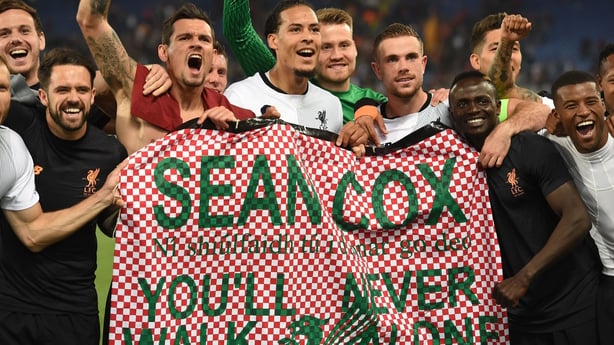 Cox has been in the National Rehabilitation Hospital in Dublin for the past nine months and will be discharged later this month. He will travel to the UK in the summer 2019 to begin the next stage in his rehabilitation, focused on developing his speech, mobility and cognitive functions.

This will be largely privately funded from monies collected by the Seán Cox Rehabilitation Trust which, over the past twelve months, has raised in excess of €2m.

Donations to help with Seán’s future rehabilitation can be made here.