Thousands descended on Madrid for a legacy-defining encounter at the end of a scarcely-believable continental campaign, with both sides narrowly making it through the group stage and then completing jaw-dropping semi-final wins.

But only one could emerge triumphant at the Wanda Metropolitano and Liverpool would be crowned champions of Europe for a sixth time as Salah's early spot-kick was followed by a strike from semi-final hero in a 2-0 win.

Mauricio Pochettino's players dropped to the deck as the red hordes went wild at full-time as Klopp ended his cup final hoodoo to win his first trophy as manager of the club and ease the hurt of missing out on the Premier League title.

Champions League glory also helped put last year's final loss in Kiev behind them. There was Irish interest as Republic of Ireland Under-21 goalkeeper Caoimhín Kelleher collected a medal as the Reds' third-choice goalkeeper on the night.

Then, Salah left the field in tears after a clash with Real Madrid's Sergio Ramos resulted in a shoulder injury. This time his early spot-kick set Liverpool on course for glory.

And while this all-English final was not a classic due to a mixture of the heat, tension and the teams' three-week breaks, Liverpool fans will not care after breaking Tottenham hearts in what was their first European Cup final.

Pochettino will be frustrated his side were not able to produce more, although Liverpool goalkeeper Alisson Becker was in fine form.

Returning star Harry Kane failed to make an impact, whereas Origi once again proved an unlikely Champions League hero for the Anfield team.

Almost sold last summer, his brace in the semi-final win against Barcelona was followed by a superbly-taken strike off the bench in Madrid to seal the trophy for Liverpool as Spurs fell short. 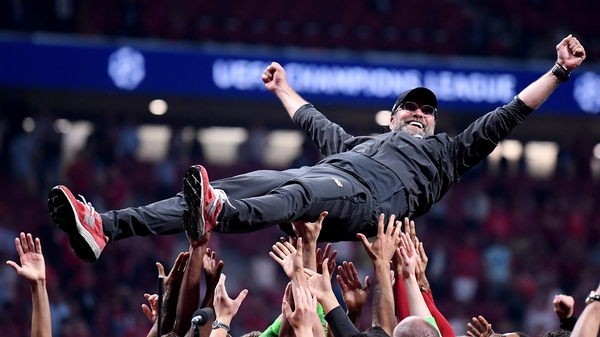 Rival Guardiola among the first to congratulate Klopp Soccer