John Mountney scored the first hat-trick of his career as Dundalk opened up a three-point lead at the top of the SSE Airtricity League table with a comprehensive win over Sligo Rovers at Oriel Park.

With Shamrock Rovers' fixture with Waterford postponed due to next week's Toulon Tournament, this was an opportunity for the champions to exert some pressure on the Hoops and they did so comfortably, ending Sligo's seven-game unbeaten run.

Vinny Perth's side have left it late in recent weeks but they opened like a steam train here, making the breakthrough with less than 30 seconds on the clock.

Patrick McEleney hooked the ball across from the left and Mountney rose above his marker to head past Ed McGinty.

The natives continued to probe with intent and Flores went close again in the 19th minute, his glancing header just evading the post after a neat triangle of play involving the Derry trio of Michael Duffy, Dean Jarvis and McEleney.

Liam Buckley's side, who had to plan without the injured Dante Leverock and John Dunleavy, eventually got to grips with things and they almost leveled with their first real attack of note in the 25th minute.

Daryl Fordyce cut the Dundalk back four open to slide Romeo Parkes in but the Jamaican, whose physicality and movement troubled Dundalk, saw his effort fly across the face of goal with nobody in a red shirt there to take advantage.

The hosts always looked a threat in the final third and Duffy tormented Kris Twardek on the left with last year's PFAI Player of the Year unlucky not to edge Dundalk further ahead before the interval.

The Bit o'Red started the second half well, forcing Dundalk into a number of errors and Gary Rogers had to react smartly to tip a clever David Cawley free around the post in the 58th minute.

Their momentum was checked just two minutes later, though, as Dundalk were awarded their ninth penalty of the season when Hoban's effort was blocked by the outstretched arms of Kyle McFadden. 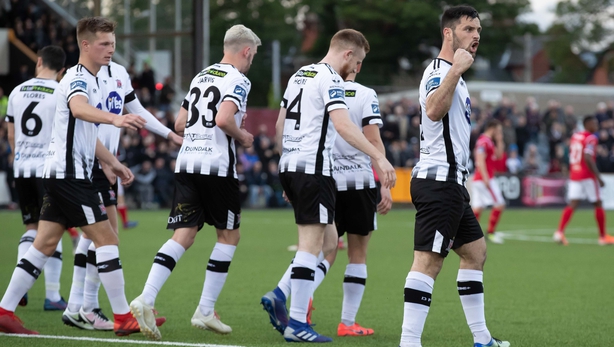 Referee Rob Rogers blew immediately and Hoban, who saw two previous spot kicks saved by McGinty, made no mistake, sending the 'keeper the wrong way to take his tally to 11 for the season.

Mountney put it to bed when he headed home a Duffy cross to make it 3-0 and he completed the hat-trick with his final kick of the game in the 81st minute, steering a fine penalty past McGinty after Hoban was clipped by McFadden.