Ryan Swan scored twice, with his first goals of the season, as Bohemians won an eight-goal thriller to earn a first victory in six league outings.

It was to be no happy 200th match in charge of Finn Harps' for manager Ollie Horgan whose bottom-of-the-table side finished with 10 men and have now lost on their last 12 visits to Dalymount Park.

In an action-packed opening to the match, the sides swapped goals inside three minutes.

Bohemians were ahead after just 40 second from their first foray forward.

All the goals from Dalymount as Bohs defeated Finn Harps #rtesoccer pic.twitter.com/XAicXU8w13

Danny Mandroiu’s square pass found Keith Ward whose drilled shot came back off a post. Kevin Devaney was alert to the loose ball to tap it into the net.

Scarcely the start Harps, without a win away to Bohemians this century, wanted. But they responded superbly to level in the third minute.

Niall Logue reacted quickest to the rebound to drive a low shot to the far corner of the net.

Minutes later Talbot, released from Republic of Ireland duty to play, had to show his agility to tip a shot from Caolan McAleer out for a corner.

In an open game, a silly push by Logue on Swan then gifted Bohemians a free kick on 25 minutes. Mandroiu curled it around the defensive wall, though also past Peter Burke’s left-hand post.

But Bohemians were back in front two minutes later.

A hooked Mandroiu effort from a Scott Allardice cross was partially cleared off the line by a defender. But it dropped invitingly to give Swan a close range finish into an open goal.

A fine piece of refereeing brought Harps level again two minutes into the second half. 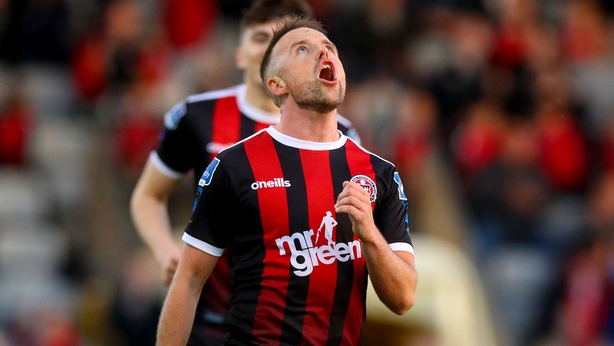 Cork whistler Graham Kelly played an advantage after McAleer had been tripped. The ball ran into the path of Raff Cretaro who smacked a low drive in off Talbot’s far post.

Such was the nature of the game, Bohemians were back in front three minutes later.

Mandroiu was upended by Sam Todd some 30 yards out. The Ireland under-21 international’s strike appeared to take a defection off the wall to wrong foot Burke and enter the net.

A ball over the top caught Harps flat as Swan timed his run in behind to perfection to score with a delightful lob over Burke.

Having substituted Todd before he was likely to be sent off, Harps were then reduced to 10 men on 62 minutes when McAleer was dismissed for a foul on Paddy Kirk, his second booking.

Ward added Bohemians’ fifth goal from Andy Lyons’ cross on 80 minutes, rifling his shot to the roof of the net.

O’Reilly then got some late consolation for Harps with the goal of the game four minutes from time from a stunning direct free kick that went in off a post.