With the last kick of a forgettable game, Simon Madden rescued a most unlikely point for St Patrick's to break Cork City's resistance.

Karl Sheppard's calm finish seemed to have decided a scrappy encounter with Saints' up-and-down season entering glass-half-empty territory and Cork going the other way, only for Madden to score a rare goal and earn the home side a point.

This was a killer for Cork who looked totally in control in the second half and instead of jumping up to sixth wake up tomorrow morning in eighth place.

It took City a long time to warm up but the hosts – lacked the guile, a problem all season, to take advantage.

City boss Cotter made an interesting change in playing Shane Griffin on the wing but the classy defender had to go off injured on 11 minutes; fortunately for the Rebels, they had the luxury of calling on Daire O'Connor to come in.

He would enjoy a fine game too.

A lifeless atmosphere and a game to match ensued for the rest of the half, with Conor McCarthy, who excelled despite a bandaged head and got the man of the match gong, directing towards goal but prompting a comfortable save from Brendan Clarke on 34 minutes. 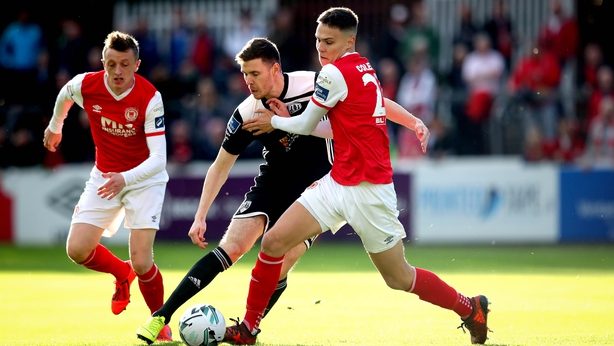 Shortly afterwards, Gary Shaw went off with his own suspected head injury.

Finally, as half-time approached, so did a goal – or nearly, at least. At last there was some ingenuity, with Patrick's going close to the opener.

Mikey Drennan found a pocket and played the ball inside to substitute Jake Walker but McCarthy fashioned a brave diving block, forcing a corner from which Drennan found Toner, the defender's header no problem for Mark McNulty.

Drennan, lively, had mild penalty claims shortly afterwards, but his wild free-kick which threatened to clear the Camac River on half-time rather summed the quality of this game up to that point.

'You keep playing to the whistle - Pat's boss Harry Kenny reckons a draw was a fair result #rtesoccer pic.twitter.com/17RrEsdhZ9

Indeed, as the PA man made his customary reference to there being no re-admittance if one left the ground at half-time, he probably wondered did he even need bother.

James Tilley has been one of City's better players this season but he spurned two chances to score shortly after the interval, initially curling wide before a far better chance on seven minutes.

The tigerish Conor McCormack won possession and played it to the raiding Colm Horgan, who found Tilley.

The Englishman engineered space easily but his stuttered shot was wide of Clarke's post.

Saints rallied and the promising Ciaran Kelly headed straight at McNulty when better direction would have had the veteran stopper in trouble.

Whilst this ex-Galway player had not had an especially influential game to that point, he personified calmness in finishing at the near post.

Cork grew in confidence and nearly went 2-0 up on the hour mark but, having been found by Buckley, Tilley forced a smart Clarke save.

Sheppard was now full of swagger and he produced a delightful cross for O'Connor, whose header seemed to take an age to hit the ground but just cleared the post at the Shed end.

Midway through the half, Walker's header went above McNulty's crossbar as Saints tried in vain to create something.

Chris Forrester, deployed in a deeper role, was taken off with 20 minutes to go and replaced by Jamie Lennon, Forrester again showing little to imply he was even remotely close to the form that earned him a move to Peterborough United in 2015.

With McCormack and Sean McLoughlin – strongly linked with a move to England recently - guarding their goal with poise and stature at the back, Saints' fans had all but accepted some way from full-time that the game was up.

Incredibly, it wasn't, with Madden stealing in at the back post to fire beyond McNulty after Walker had headed down Clarke's punt forward.

It was effectively the last kick of a game that reminds one why never to leave early.