Liverpool manager Jurgen Klopp admits he still has to "kick backsides" in training in order to ensure his players maintain their high standards.

Despite reaching a second-successive Champions League final and finishing second to Premier League champions Manchester City with a record 97 points for a runner-up, the Reds boss knows there is no margin for error as they prepare to face Tottenham in Madrid on Saturday.

And while he admits he has been "touched" by the squad's performances this season, he has not gone soft.

"I couldn't be prouder of the boys, but we are not in the moment to feel it," he told liverpoolfc.com.

"I'm proud - very proud - but it's not a moment to feel it; it's a moment to really feel each muscle and it's important we really say, 'OK, come on, we need everything to do it because we want it'."

There have been many highlights in a thrilling season but, notwithstanding the result in the final, top of the list is the semi-final second-leg comeback against Barcelona.

Trailing 3-0 after playing at the Nou Camp, a famous night at Anfield saw Klopp's side win 4-0 in a genuinely stunning performance.

"For me, the key moment in that game was kick-off: they passed the ball back and we jumped on them," the manager added.

"I described it to the boys as (being) like lions who had not been fed for eight weeks!

"I was like 'Wow! OK, that's a good start. That's how it can work'. And then we scored and then it was an open game, I would say." 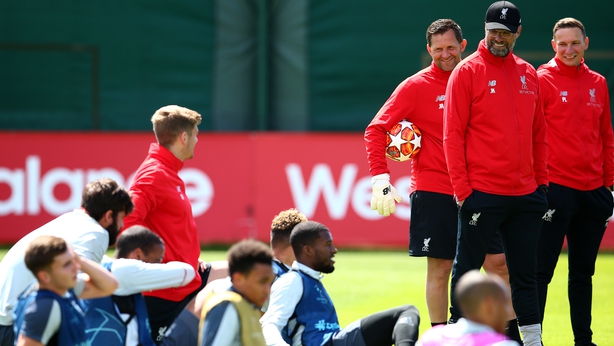 Klopp has regularly stressed that what matters to him most is the progress his side makes.

He believes if they maintain their upward curve trophies will arrive without he or his players having to obsess too much about winning silverware.

"Quite a lot of times, I was really touched by what the boys did, scoring the goals we scored, fighting the fights we fought and all that stuff," said Klopp, who is seeking to end a run of six-successive defeats in finals this weekend.

"It was special and of course you can't always do it like this. We have a lot of potential in the team and the boys mixed it up with an attitude I never saw before - and that's just outstanding.

"And that's what I meant when I said they are 'mentality monsters'.

"We see our development, we know what we do, we improve so much it's unbelievable.

"If there was a prize for the biggest development in the last 12 months then it's going to the Reds, that's how it is.

"The boys did a really amazing job, but we get that it's about winning competitions, so for us we want to win the competition and if not then be as close as possible.

"That's pretty much, apart from winning, the best thing that can happen - be as close as possible because that makes things rather reachable than unreachable - that's very important."

Follow the Champions League final between Tottenham and Liverpool via our live blog on RTÉ.ie/sport and the News Now app.