Holders Derry City needed extra-time to see of Finn Harps 2-1 and book their place in the semi-finals of the EA Sports Cup.

Harps looked like they were going to plunder victory at the Ryan McBride Brandywell Stadium when Nathan Boyle fired them ahead in the 55th minute.

Parkhouse struck again three minutes into the additional play when he rounded Mark McGinley and knocked home. Harps went down to ten men when Mark Coye picked up a second yellow in the 188th minute and the Candystripes closed it out to keep their hopes of retaining the trophy alive. 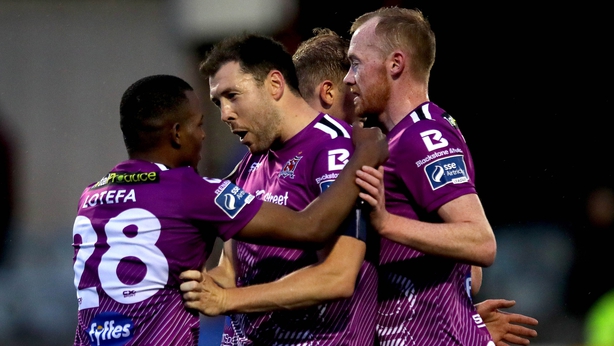 Dundalk booked their place in the semi-finals of the EA Sports Cup with a 3-1 defeat of UCD at Oriel  Park on Monday night.

Brian Gartland thumped home a John Mountney header just seven mnutes in to give the Lilywhites the perfect start.

Paul Doyle drew a terrific save from Aaron McCarey shortly afterwards as the Students threatened to grab a swift leveller, but Mountney doubled the hosts lead in the 18th minute when he confidently slotted home after a good Cameron Dummigan through ball.

Lido Lotefa came agonisingly close to making it three when his excellent strike cannonned off the woodwork.

UCD made a game of it in th esecond half and got a lifeline ten minutes from time when Yoyo Mahdy finsihed from close range.

However, in injury-time Gavin Sheridan's save from Lotefa's effort fell to Georgie Kelly whop made no mistake to warp up the win and send his side through. 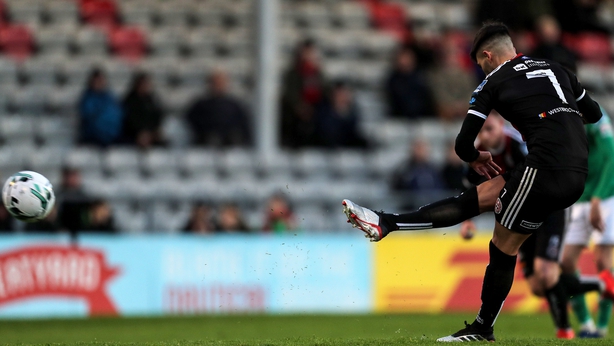 The Gypsies squandered the opportunity to break the deadlock in the 31st minute. Kevin O'Connor brought down Ryan Graydon in the box but Sam Byrne's spot-kick was saved by the sprawling Tadgh Ryan.

Two minutes later, Bohs did take the lead. Graydon's strike hit the post but came back to Ross Tierney and he tapped home.

Keith Long's side were awarded another penalty in the 82nd minute, and this time Danny Mandroiu slammed it high into the net. Game over, and Bohs are in the last four.

They'll be joined by Waterford FC who squeezed past Bray 1-0 at the Carlisle Grounds.

It was settled by a fantastic Scott Twine free-kick from 25 yards out in the 15th minute that flew into the top corner.

Bray had plenty of the ball in an open game but they just couldn't penetrate the visitors' rearguard, and it's the Blues who progress.