A year after suffering Sky Bet Championship play-off final heartbreak at the hands of Fulham, Villa made amends as El Ghazi and McGinn headed home either side of half-time to give them control of a pulsating encounter.

Rams substitute Jack Marriott set up a tense finish by halving the deficit nine minutes from time but Villa dug in to hold on.

Victory for Dean Smith's side in the most lucrative game in world football will pocket the West Midlands club a minimum £170m and returns them to the top flight for the first time since relegation in 2016. 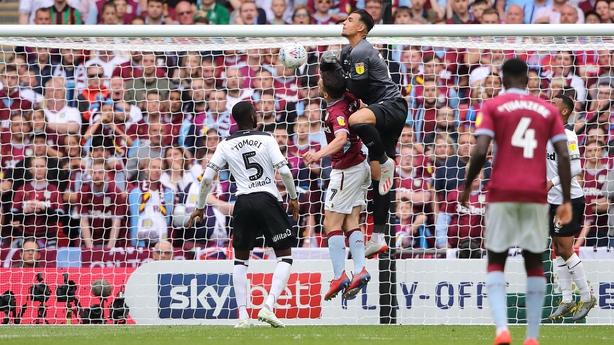 Frank Lampard's men, who impressively came back to knock out Leeds in the semi-finals, struggled to create for much of the game and could have few complaints about a result which condemns them to a 12th successive campaign in the second tier.

Lampard's disappointment contrasted with the jubilation experienced by his former Chelsea and England team-mate John Terry, who was in the opposing dugout in his role as Villa assistant boss.

The Republic of Ireland contingent also found themselves on different ends of the emotional spectrum.

Conor Hourihane and Glenn Whelan danced with delight on the the pitch after the final whistle, but it was another heartbreaking trip to Wembley for Richard Keogh, who has now reached the play-offs four times with the Rams and failed to go all the way every time.