Mark Travers had only one regret after his stunning Premier League debut - that he forgot to ask World Cup winner Hugo Lloris for his shirt.

A fortnight before his 20th birthday, the Bournemouth goalkeeper was thrown in at the deep end by manager Eddie Howe when he lined up against Tottenham at the Vitality Stadium, announcing himself to an international audience with a series of fine saves as the Cherries sealed a 1-0 win on 4 May.

He was told he would play the day before and freely admits the prospect of going head-to-head with Lloris only sank in as the teams lined up in the tunnel before kick-off.

Travers, who is currently on Republic of Ireland duty at their training camp in Portugal, said: "The night before, you think about everything, but it only hits you in the tunnel when you look across and he's standing there.

"I think it just gave me more confidence to do well, it didn't make me nervous. I felt I was meant to be there."

Asked if they had spoken after the game, Travers added: "He just pulled me and just said, 'Well done' and 'Keep going'.

"I'm gutted I didn't ask for his jersey, but it was just in the moment that I forgot to ask for it. Hopefully another time." 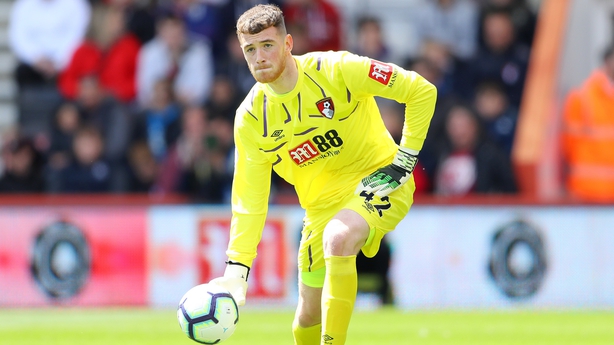 Travers, who hopes to push Darren Randolph for his place in the Ireland team while at the same time bidding for regular football at club level, had an early lesson about the vagaries of the game eight days after his debut, when he kept his place and found himself on the wrong end of a 5-3 final-day defeat at Crystal Palace.

He said: "I learnt even more from the second game about myself and stuff. It was good to have that contrast in games and I'll learn loads and take that into next season as well."

In the meantime, Travers is hoping to be a surprise package in the Ireland camp on both the training pitch and the golf course when Mick McCarthy's men take a break from training on Friday.

As a 14-year-old, he had a handicap of four and might have gone down that route as a professional until football took priority.

He said: "That's all I did up to 14 or 15. I was probably going to play golf instead of football until Under-16s, when I started going on a few trials and football took over."

Asked if his team-mates were aware of his past, he said with a smile: "Not yet. I'm going to keep that one for myself. I may put a bit of money on it and see what happens."