Luca Connell could not quite believe he had been called up to the senior Republic of Ireland squad until he was sitting on the plane to Portugal.

The 18-year-old Bolton midfielder was drafted into Ireland's week-long training camp in Quinta do Lago at the last minute when his father Andrew received a call from manager Mick McCarthy at the weekend.

Liverpool-born Connell said: "It was only Sunday night the gaffer rang my dad and said he'd be interested, had heard a lot about me, hadn't seen me live yet, but he's looking forward to seeing me, so I can't wait to get on the pitch.

"To be honest, I didn't know what to do. It's one of those ones, I was confused and it didn't really sink in until I was on the plane that I was actually coming over to meet the first-team squad."

Connell, who has played at age group level for Ireland, but is also qualified to represent the country of his birth - there has been speculation that he is being monitored by the England set-up - admitted it was "surreal" to walk into the team hotel to meet McCarthy, assistants Terry Connor and Robbie Keane and the rest of the players.

However, there was one man whose acquaintance he was particularly keen to make.

He said: "It's crazy, it's surreal to be honest, especially Seamus Coleman. Being from Liverpool and supporting Everton and supporting him through everything, it's brilliant for me.

"I spoke to Seamus last night, he welcomed me in. Being the skipper, that's part of his job as well, isn't it? But he's a lovely, lovely fella. I can't thank him enough for welcoming me in."

Connell is scheduled to be with the squad only for the week in Portugal - they face Denmark and Gibraltar in Euro 2020 qualifiers early next month - although McCarthy threw him down a challenge as he prepared to start work.

The manager said: "He knows he's coming in for the week in Portugal - unless he rips it up, of course and he's top man every day, who knows?"

Asked if he intended to rip it up, the midfielder replied with a smile: "I'm going to try my best." 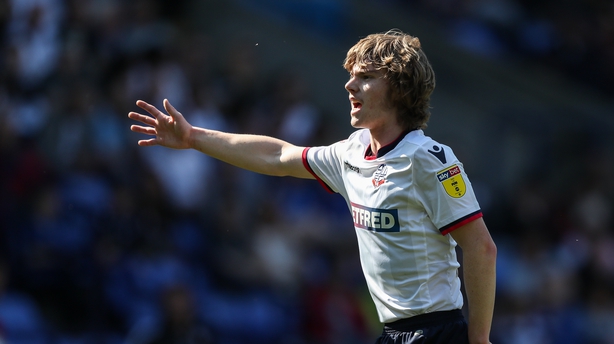 The midfielder's elevation comes at the end of a breakthrough season at Bolton during which he made 15 senior appearances in difficult circumstances with the club battling, an ultimately failing, to secure Sky Bet Championship survival amid upheaval off the pitch.

He said: "It's been a tough season for the club, the players, the staff, the fans, tough all around. But it's been a good season for me personally. I've experience in the Championship and I'm grateful to the gaffer for giving me the chance."

Connell is out of contract at Bolton this summer and has been linked with a series of Premier League clubs, Tottenham, Southampton, Wolves, Burnley and Brighton among them, in recent weeks.

However, he is setting that all to one side as he attempts to impress on the international fold over the next few days.

Asked about his future, he said: "I don't know, I'm leaving that down to my agent. Hopefully he's sorting that out while I'm away, seeing what's about and what he thinks is best for me."