Mark Travers has reason to smile in Quinta do Lago and not just because of the weather.

The Republic of Ireland goalkeeper burst onto the scene with his performance for Bournemouth against Tottenham Hotspur and retained his place in the final-day 5-3 defeat at Crystal Palace.

The 20-year-old is one of a host of young talented goalkeeper and is currently the pick of the bunch ahead of Caoimhin Kelleher, Gavin Bazunu and Kieran O'Hara.

That breakthrough performance against Spurs brings an even happier expression when mentioned – a time he found out more about himself that any other day.

"That was unexpected," he told RTÉ Soccer Correspondent Tony O’Donoghue.

"I thought there’d be a few more but I just felt comfortable out there. I learnt loads about myself really. I just enjoyed every minute being out there.

"It was a very exciting game for me and my family.

"It probably came sooner than I thought it would. The gaffer just said to me you deserve it, you worked hard during the season. He rewarded me with the last two games which was great and I was very grateful to him for doing that for me." 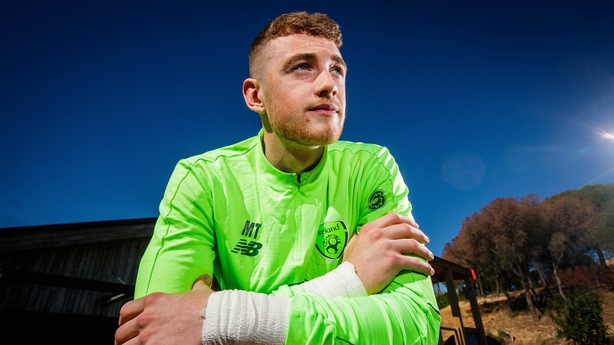 Now in his third season with the Cherries – time he admits has raced by – it’s international focus on his mind as understudy to Darren Randolph.

The training camp is extremely important to Mick McCarthy, knowing this is the only real opportunity for the squad to bond for a long period and to make an impression on the players.

For Travers, it's just about maintaining his upward curve.

"I want to keep fit. We have a good three weeks ahead of us leading into the two games. Everyone is just looking to stay sharp and keep fit before the two games.

"We’ll see what happens the next few weeks and how training goes. We’ll take it from there really.

"The mood in the camp is great. Everyone is delighted to be back in and the sun shining as well, how can you not be happy?

It remains to be seen what match action Travers will receive and it’s likely a friendly game later in the year will eventually provide a debut.

For now, watching Premier League counterpart Kasper Schmeichel from the bench is the expected plan in the all-important qualifier against Denmark, and encouraging Darren Randolph to maintain his fine club form.

"He [Kasper Schmeichel] has had a great few years with Leicester and I’m looking forward to watching him live.

"Darren has been unbelievable, getting into the Championship Team of the Year and something like 20 clean sheets.

"I’m delighted for him and I think he will continue to do what he is doing."