The Northern Ireland manager was mentioned in relation to The Hawthorns position, and while O'Neill reiterated that club football remains an attractive proposition, he stressed that he was preparing for two important European encounters.

The Baggies have actually opened talks with Lincoln boss Danny Cowley, which suggests that O'Neill is not on their immediate radar.

The English midlands club have already held preliminary discussions with Cowley and are planning a second round of talks this week.

"I am under a long-term contract with the IFA and have two very important games in June, that is where my focus is at the minute," said O'Neill, speaking to the BBC.

And while O'Neill looks ahead to the immediate fixtures as Northern Ireland take on Estonia and Belarus, the former Shamrock Rovers manager admitted that there was an appeal to working in the Championship at a club that is "right for me".

Northern Ireland opened their Euro 2020 qualifying campaign with two wins against both of next month's opponents, so two more wins in June would place them in a very strong position going into the autumn fixtures. 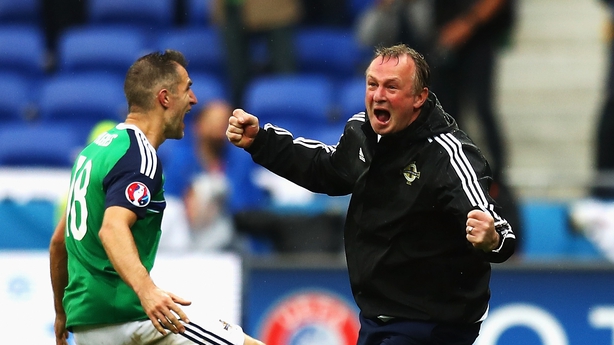 Of course, home and away ties against Germany and Holland await the North after the summer, which should prove the ultimate test as to whether O'Neill's side can gain one of the two automatic places on offer for next summer's showpiece.

While O'Neill is focusing on all things Northern Ireland, he did offer a bit of insight into where his future might lie as he spoke about examining the structures in place at potential clubs.

O'Neill's last job in club management was at Shamrock Rovers where the former Newcastle and Hibernian midfielder led the Hoops to back-to-back league titles in 2010 and 2011.

Northern Ireland also qualified for Euro 2016 under O'Neill's tenure and reached the knock-out stage of the competition, going out to eventual semi-finalists Wales, losing 1-0 at Parc des Princes.

"Of course, club football is always attractive and you can never plan too far ahead in football. It is nice that people recognise the job that you are doing.

"The Championship is certainly a very appealing league to work in.

"When you are looking to step out of the situation I am in, you are always looking at what the structure of the club is and that it is right for me."