Brighton attacker Aaron Connolly and Manchester City's Tyreke Wilson are among the new faces in Stephen Kenny's Republic of Ireland Under-21 squad as the manager gears up for next month's Maurice Revello Toulon Tournament in France.

Kenny named his 22-man panel on Tuesday and will finally get a good look at Galway man Connolly, who was named the Premier League 2 Player of the Year after scoring 11 goals in 15 games for the Seagulls' Under-23s this term.

Connolly has played for the Ireland Under-17s and Under-21s but was injured for Kenny's first competitive game back in March - a 3-0 defeat of Luxembourg.

Cherry Orchard product Wilson was included in City's first-team squad for their pre-season tour to the US last summer. The left-back moved to England back in 2016.

Stephen Mallon, who was on loan at A-League side Central Coast Mariners from Sheffield United last season, has also been called into the Ireland Under-21 for the first time as well as Derby County midfielder Jason Knight.

Knight was on the bench for the Rams' dramatic Championship play-off win at Leeds and comes in for the injured Jake Doyle Hayes.

UCD stopper Conor Kearns gets the nod having spent time with the squad in the home-based training camp in February.

Barnet's Jack Taylor meanwhile receives his first international call-up and Brentford defender Canice Carroll, who was on loan at Swindon Town last season, gets his chance to shine. 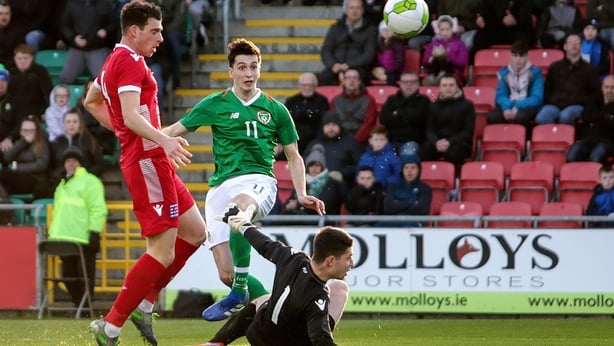 Connor Ronan is included. He signed a new contract with Wolves yesterday that ties him to the English midlands club until 2021. He is currently on loan at Slovakian outfit FC DAC 1904 Dunajska Streda, and helped them to secure qualification for the Europa League.

The tournament, which begins on 3 June, will see Ireland face Bahrain, China and Mexico in Group C in Provence. It will be the first time since 2002 that Ireland have competed in the tournament.

"This is a fantastic opportunity for the players to express themselves in one of the most prestigious underage international tournaments," said Kenny.

"We've never qualified for the European Championships at Under-21 level so this represents the highest level we'd have played at.

"It's also crucially important that we continue to build momentum throughout the year after the win over Luxembourg and look ahead to the qualifiers in October and November.

"I'm delighted to welcome into the squad the likes of Stephen Mallon, Canice Carroll, Jason Knight, Tyreke Wilson and Aaron Connolly who step up to Under-21 international level for the first time, and also Jack Taylor, who comes into his first Ireland squad."

Republic of Ireland U-21 Squad