A scoreless draw did little for either side as Sligo Rovers and Derry City played out a stalemate at The Showgrounds.

Both teams had their respective goalkeepers to thank as Rovers’ Ed McGinty and Candystripes’ Peter Cherrie pulled off vital saves in each half.

In a first period, which didn’t produce much in terms of quality, it was the away side who might have had the lead after less than two minutes.

Unmarked at the back post, the disorientated Eoin Toal was unable to direct his header the right side of the post after latching on to Barry McNamee’s free-kick.

Rovers had their only first half effort at goal six minutes later. Romeo Parkes pushing David Cawley’s ballooned cross back into the area where Dante Leverock’s headed effort was easy for Cherrie to deal with.

Declan Devine’s charges over ran Rovers in midfield at times in the opening period. Playmaker McNamee almost caught out McGinty when the young Scot had to scramble to push McNamee’s cross-come-shot onto his crossbar and behind for a corner. 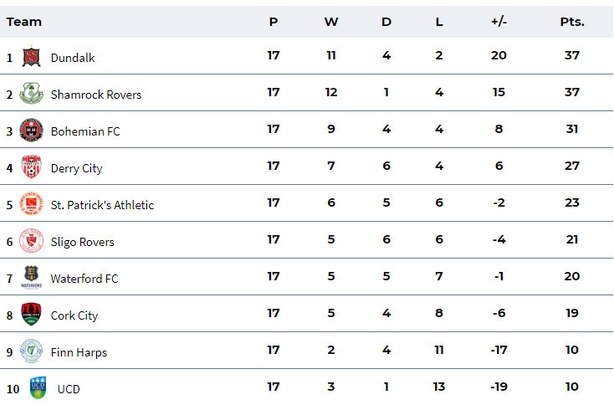 The Connacht men had a penalty call dismissed shortly after the half hour. Centre half John Mahon looked as if he was impeded in his attempt to get to Regan Donelon’s corner. Referee Damien MacGraith showed little interest in Rovers’ calls.

An enthralling second half was six minutes old when again Derry spurned a great chance. Niall Morahan under-cooked his backpass towards McGinty to allow Ciaron Harkin through on goal. But McGinty emerged best in the one-on-one dual as he got a leg to Harkin’s low effort.

Sligo were amongst the chances again on 70. Darren Cole's misjudgement allowing Parkes’ flick on reach Ronan Coughlan, who turned his man before pulling a super save out of Cherrie.

While the Derry number one somehow kept out Coughlan again moments later. Cherrie somehow shifting his feet in time to sweep the Limerick native’s shot away, with Leverock going close on the follow up.

Derry edge closer to Europa League after win in Sligo

Spoils shared in the battle of the Rovers