Danny Mandroiu’s truly sublime free kick deservedly earned Bohemians a share of the spoils as they came from behind in a pulsating Dublin derby at Richmond Park.

Darragh Markey’s first goal of the season and a penalty save from Brendan Clarke looked to have earned St Patrick’s victory in this SSE Airtricity League Premier Division clash.

But defeat would have been harsh on the Phibsborough side who contributed hugely to a riveting contest by the Camac.

With Republic of Ireland captain Seamus Coleman and under-21 manager Stephen Kenny interested spectators, it was the visitors, looking more comfortable in their shape, who started the better; striker Dinny Corcoran having a goal-bound header from a Mandroiu corner cleared by Kevin Toner five minutes in.

St Patrick’s had further defending to do just a minute later when Mandroiu’s improvised free kick to Danny Grant worked a save at the foot of a post from Clarke.

While Ciaran Kelly and Ian Bermingham had headers over the top at the other end, the main action remained on Clarke’s goal. 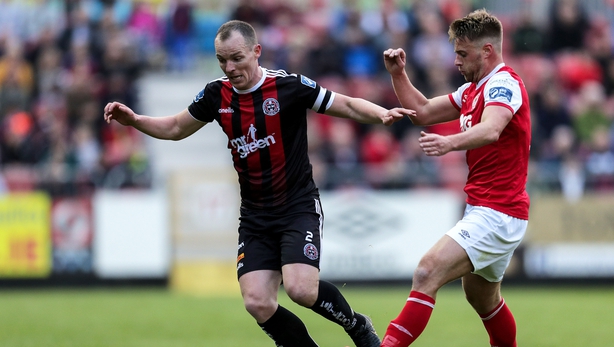 Despite losing Conor Clifford to a hamstring injury, St Pat’s subsequently enjoyed their first decent spell of possession just past the half hour mark.

But Bohemians remained the more creative in the final third. Mandroiu was central to the action again, playing in Corcoran who turned a defender to see his shot deflected wide.

The pattern of the game changed utterly on 40 minutes, though, as St Pat’s took the lead against the run of play with their first effort on target.

A loose pass by Robbie McCourt in midfield was clinically punished. Markey surged forward, playing the ball to Gary Shaw.

The return cross from the big striker was perfect for Markey, the smallest player on the pitch, whose looping header beat James Talbot to drop into the net for his first goal of the season.

With far more purpose to their game, the home side made it a more even contest possession wide after the break.

But a chief talking point of the second half came when Bohemians spurned the opportunity to equalise from a 70th minute penalty.

The home side were incensed when skipper Ian Bermingham was ruled to have taken down Grant inside the area.

The Inchicore side duly felt justice was done when Clarke dived to his left to parry away Corcoran’s spot kick.

But Bohemians got their due reward from Mandroiu’s moment of brilliance on 78 minutes.

Jamie Lennon was booked for taking down the Bohemians attacking midfielder.

Further punishment duly arrived as the Ireland under-21 international rifled an unstoppable free kick up and over the wall to the top corner of the net to finally beat Clarke. 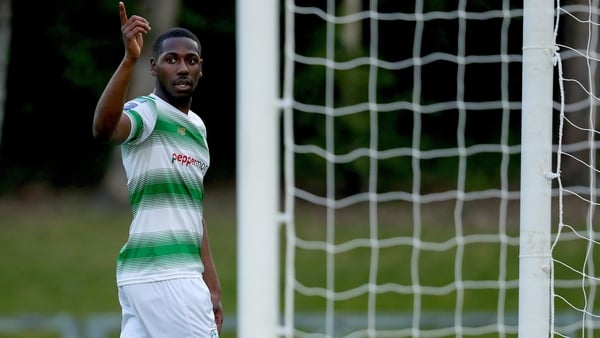