Frank Lampard is hoping Derby's powers of recovery will be evident once more against Leeds in Wednesday's Sky Bet Championship play-off semi-final at Elland Road.

The Rams need to overturn a 1-0 deficit from the first leg if they are to keep alive their promotion dream.

On six occasions this season Derby have come from behind to win league matches, including away at champions Norwich in December.

Lampard's side also fought back to knock out Manchester United and Southampton in cup competitions, winning on penalties each time.

"This year we have been a team, more so than pretty much any team, who have come back from behind and turned a negative result around into a positive one," said the Derby manager.

"I have faith and I have belief and those results are good for that. So tap into it, yes, but they mean nothing on Wednesday night.

"We've had some big performances this season where we've turned around results in games and took a losing game and made it a winning game.

"So we need to use that belief but Wednesday now is purely about application - how we prepare and our mindset and ultimately how we play on the pitch.

"We don't have to go crazy in a game where we're 1-0 down at half-time. I want the players to apply themselves exactly as they have been doing, because I have no complaints on that front, it's just about the fine details and being a bit more composed on the ball." 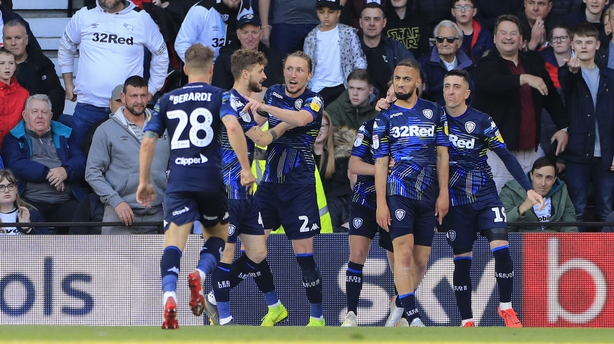 If Derby are to reach the Championship play-off final they must do what they have failed to do on three previous attempts so far this season - beat Leeds.

Marcelo Bielsa's team did the league double over the Rams - winning 4-1 and 2-0 during the regular season before a 1-0 success in the first leg on Saturday.

The second leg sees Derby return to Elland Road for the first time since the controversial 'Spygate' scandal in which Leeds boss Bielsa admitted to having had the Rams' training sessions watched before his side's 2-0 victory in January.

Lampard said: "I think it would be slightly taking your eye off he ball to get caught up in any revenge or thinking about can we beat them because of this or that. All I see is a 1-0 game that needs to be turned around.

"I don't care who it is against or what previous there is, it's about can we perform well enough to get to Wembley."

Derby are hoping that Martyn Waghorn will be fit. The 13-goal striker missed the first leg with an Achilles injury but he has been training since.

Left-back Ashley Cole could also be involved after he resumed training following an absence with a groin injury.