Premier League referee Mike Dean could not contain his emotions in the stands as Tranmere Rovers set up a League Two play-off final showdown with Padraig Amond's Newport County on Monday night.

Leading Forest Green 1-0 from the first leg of the semi-final, James Norwood's first-time volley midway through the first half at The New Lawn cancelled out an early header from home skipper Joseph Mills to clinch a 2-1 aggregate win, and set up a 25 May Wembley showdown with Newport.

Dean, born on the Wirral in north west England, has been a top-level official for the last 19 years. But he was very much in supporter mode as the cameras picked him out passionately celebrating Tranmere's progression at the full-time whistle.

Premier League laws state that refs aren’t allowed to officiate games involving the teams they support - or their rivals' games - but since Tranmere play at a lower level, Dean was within his rights to back his side. And back them he did. 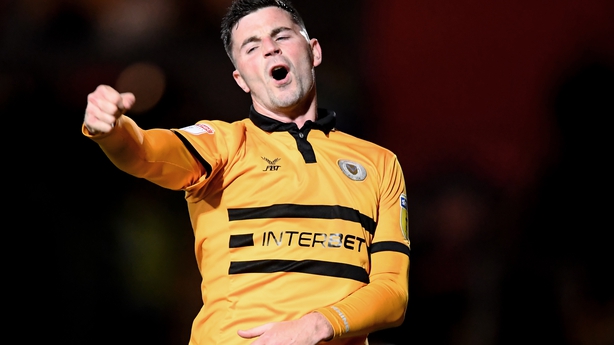 The sides played out a 0-0 draw after a 1-1 draw in the first leg (in which Amond got the Newport goal) and County prevailed 5-3 in the shoot-out.

Carlow man and recent Republic of Ireland provisional call-up Amond converted a spot-kick in the shootout as Tyler Walker missed for Mansfield, leaving Matt Dolan to do the honours for the visitors.

Dublin's Mark O'Brien was also on the winning side while Donegal goalkeeper Conrad Logan and former Ireland Under-21 defender Ryan Sweeney were in the Mansfield XI.