Rafael Benitez will hold crunch talks with Newcastle owner Mike Ashley next week to reach a decision over his future.

A 4-0 rout of Fulham at Craven Cottage concluded the season with a flurry of goals that secured the club a 13th-placed finish in the Premier League.

Ashley watched from the stands as a noisy contingent of 3,000 travelling fans repeatedly called for Benitez to stay at St James' Park for another year.

The Spaniard, however, hinted that his willingness to extend his three-season reign will hinge on Ashley's vision for Newcastle.

"We will have a meeting hopefully next week and we will see where we are," Benitez said.

"I can see the potential of this massive club and hopefully we can do things in the way that would be very good for everyone to move forward together. I don't want to keep talking, we'll see what happens next week.

"Mike Ashley came to the changing room after the game to say thank you very much to all of the players.

"He was talking with me and the team. He didn't say anything special, but was congratulating the team.

"It was the end of a very good season - clean sheet, four goals, final day of the season on a sunny day.

"This is a very difficult competition and I'm very proud of this group of players who have given everything, even in the last few games when we were safe." 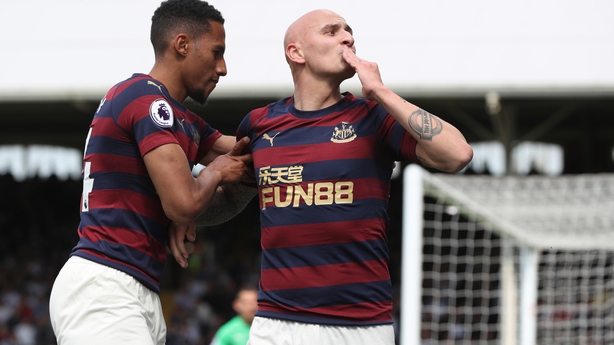 Among the highlights at Craven Cottage was the support shown by Newcastle supporters to Benitez, who was loudly cheered on to and off the pitch.

"The fans have been so good for the whole season. Since I have been here, they have been fantastic," Benitez said.

"I've been trying to do my best to give them something back. We could celebrate together. I'm always really proud and pleased when I hear the fans singing my name.

"The fans were fantastic. We weren't expecting so many fans at an away game when we'd nearly finished the season and were already safe. Everything has been positive."

"Those early goals took it right out of us, but I'm not sure the goals reflect the game," Parker said.

"Saying that, we were lacklustre and lacked a final third threat and lacked conviction at times. And we were vulnerable on the break.