Nathaniel Mendez-Laing scored in both halves - the first from the penalty spot - as the Bluebirds snatched a surprise 2-0 victory at Old Trafford, extending United's winless run to six matches in all competitions.

They end the season in sixth, a whopping 32 points behind Premier League champions Manchester City, and Solskjaer is aware that bridging that gap will prove a sizeable hurdle.

He said: "We have been poor. We've more or less hit a brick wall towards the end of the season so that's very disappointing.

"We were in with a shout (of the top four) but the last two games, of course, we've let ourselves down performance-wise.

"We should have won against two relegated teams (United drew 1-1 at Huddersfield last week) but that's another reality check for everyone.

"This league is a tough one, no matter who you play, and it's a long season and towards the end we've performed under par.

"The big plus is the season's over so we put a big line over it and look forward. We know we are too far behind where we want to be, that's the 98 and 97 points - that's exceptional from the two teams (City and Liverpool).

"We are five or six points behind third, fourth and fifth, that's realistically who we need to challenge for next year.

"The players have been going through a tough period, good players who towards the end of the season are fatigued mentally and physically."

Forward Alexis Sanchez, who scored just two goals in all competitions and made only nine Premier League starts while earning a reputed weekly wage of £500k per week - apologised to fans on Twitter but insisted he had always been "professional in all aspects".

Solskjaer, whose side could start their 2019-20 campaign in the Europa League towards the end of July depending on the outcome of the FA Cup final, has already set his sights on a top-four spot and a domestic trophy next term.

He added: "We're used to challenging for the Premier League and that's not going to be sorted quickly.

"Realistically you're not going to catch however many points - we're 32 points behind the top teams.

"We've got to realistically challenge for the top four and another trophy.

"Last time we were in the Europa League with Jose (Mourinho) and loads of these players, we won it. The FA Cup and the Carabao Cup, they're trophies we've got to start the season aiming to win." 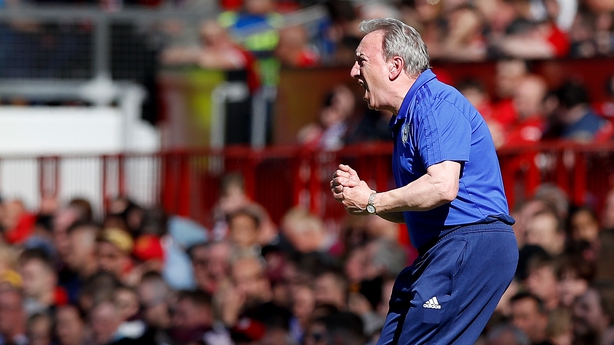 Cardiff manager Neil Warnock was full of pride in his team after they ended their season, in which relegation to the Sky Bet Championship was already confirmed before the final fixture, with a flourish.

He said: "I thought they did really well. I didn't want us to get turned over like we did when we lost 5-1 in the home game, which was embarrassing.

"I didn't want it to be a damp squib. I wanted everyone to play to their absolute maximum and give them a good game.

"I always thought our front four could cause them problems and I thought we did. In fact I think if we'd have been a little bit more confident with the final pass we could have scored a few more."

Warnock is adamant he will never manage in the Premier League again. However, his desire to earn a ninth promotion as manager drives him on.

He said: "I'm going to have one more year in the Championship. Hopefully it'll be nice to get a ninth promotion."

Whether that is with Cardiff, Warnock was coy as he added: "I don't know. I'll see the chairman and the chief executive in London (on Monday) and we'll just talk about the whole club."