Champions Dundalk moved ominously to the top of the SSE Airtricity League Premier Division table for the first time this season as goals in each half from Georgie Kelly and Sean Hoare brought them a deserved victory over Bohemians at Dalymount Park.

The win, their sixth in seven games, edges the Lilywhites to the summit above Shamrock Rovers on goal difference.

Dundalk started on the front foot with Michael Duffy working James Talbot in the Bohemians goal for the first time on 14 minutes before the visitors took a deserved lead eight minutes later.

Bohemians were unhappy that an apparent handball by Dundalk defender Hoare wasn’t given. Dundalk broke with Duffy on the left and, sandwiched between two defenders, a tackle ricocheted the ball off him to run across the area to Georgie Kelly.

The big striker, on his first league start for the club, swivelled adroitly before driving a low shot past Talbot for his second league strike of the campaign.

Danny Mandroiu’s deft touch and control was proving Bohemians’ chief threat and the 20-year-old was inches wide with a curling free kick on the half hour.

That sparked Bohemians’ best spell of the first half and they would have levelled but for a terrific save from Gary Rogers four minutes before the interval.

Left-back Darragh Leahy raided to the end line to pull the ball back for Mandroiu, whose attempt to side-foot the ball into the corner of the net was thwarted as the 37-year-old Dundalk goalkeeper dived down smartly to his right to palm the ball out for a corner.

Having struggled to get out of their own half in the early stages of the second period, loud appeals for a Bohemians penalty were not entertained by referee Ben Connolly when Mandroiu went down in the area under a challenge from Sean Gannon on 72 minutes.

A penalty at the other end should then have doubled Dundalk’s lead four minutes later when substitute Luke Wade-Slater took down the marauding Duffy. But Talbot went the right way to parry away Shields’ poor spot kick.

Talbot was beaten for a second time, though, three minutes later when he came for Duffy’s free kick only to be out-jumped by Hoare whose header found the net.

Daniel Kelly might have added to that three minutes from time following a swift counterattack, but Talbot saved well with his feet. 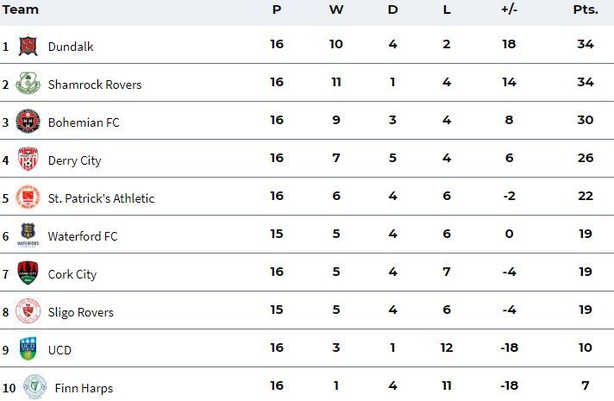