Ireland fought to the death but could not find a winner in their 1-1 draw with Belgium at Tallaght Stadium, as Colin O’Brien’s side made their exit from the UEFA European Under-17 Championships.

The ever-impressive Belgium were worthy of their 65th-minute opener from Chris Kalulika having dominated up to that point.

But Ireland, who needed to win to progress out of Group A, fought their way back into the game as Timi Sobowale grabbed an all-important equaliser to set up a dramatic end to the contest.

Ireland applied the pressure for those final minutes and six more of injury time but could not find a way past the stubborn Belgian defence as the hosts went out despite remaining unbeaten in the group, drawing all three games.

A change of goalkeeper for Ireland as they embarked on their final group game of the campaign with Gavin Bazunu ruled out through injury and replaced by Jimmy Corcoran.

The Preston keeper is the only remaining member of last year’s squad, having been controversially sent off in a penalty shoot-out against the Netherlands in the quarter-finals of the 2018 event.

Sean Kennedy and Josh Giurgi were both handed their first starts of the tournament, while Timi Sobowale returned to the heart of defence to partner Andrew Omobamidele, who grabbed that all-important equaliser against the Czech Republic on Monday in Waterford.

A bright start to the game with both sides looking to get on the front foot early in the encounter; the first chance coming from a Belgian corner in the fifth minute as centre-half Killian Sardella headed just wide.

Ireland’s first effort was a speculative shot from outside the box as Charlie McCann tried to bend one into the top corner, but the ball sailed high and wide.

Colin O’Brien’s side were matching the highly rated Belgians in that opening 15 minutes and came close to opening the scoring following some fine work by JoeHodge, resulting in a decent effort on goal by Kennedy, whose deflected effort flew just over the bar

Belgium broke from the 18th-minute corner, and so began a period of sustained pressure on the Ireland final third as chance after chance was created in front of the Ireland goal.

Anderlecht midfielder, Jeremy Doku, was causing real havoc down the left flank, gliding past players at ease, while in-form goalscorer Thibo Baten hit a fine effort following an initial save by Corcoran, but luckily for Ireland Hodge was well placed to clear the ball off the line. 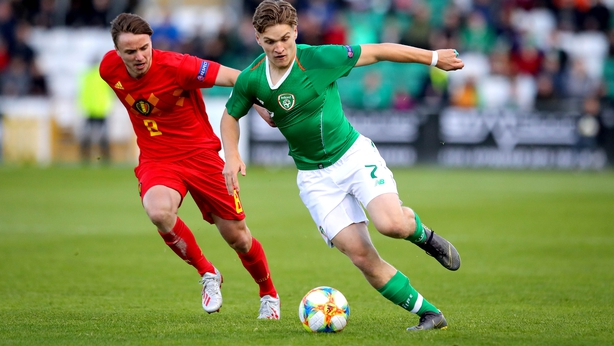 In the midst of all the Belgian pressure, Ireland actually produced their first shot on target as Giurgi picked up a loose ball, which resulted from a poor clearance.

The Norwich youngster decided to try his luck from distance, but Maarten Vandevoordt was behind it all the way and made the powerful shot look ordinary.

But it was all Belgium, and Ireland were camped on the edge of their own box repelling wave after wave of Red Devils pressure, attacking down either flank and through the middle.

The visitors were just missing a touch of quality with their final pass, as they found it hard to penetrate the deep-defending Irish, who had ten players behind the ball for large periods.

Ireland finally made it out of their own half as they worked the ball up the left flank in the 42nd minute.

The lively Giurgi skipped past two players before cutting inside and drilling an excellent effort, low and hard at the far post, forcing a full-stretch save from Vandevoordt.

That was as good as it got from Ireland in the first half and were a touch fortunate to make it in at the break on terms.

More pressure down the left led to first chance of the second half for Belgium as the ball was whipped in from the touchline in the 56th minute.

Corcoran was back-peddling but could not retrieve the cross as Kalulika rose highest to get a header on goal, but the ball just dropped on top of the net.

Ireland, who needed a goal in this final group game, irrespective of results elsewhere, eventually got going and a Joe Hodge-inspired attack saw the ball worked into the box, but composed defending prevented a shot on goal.

Belgium should have taken the lead in the 60th minute as shots from Anouar Ait El Hadj and Wouter George were both brilliantly blocked by brave Omobamidele defending.

Two more shots on goal four minutes later and again the Norwich defender Omobamidele stood firm in front of goal blocking the first, before the second flew over the bar.

But the inevitable arrived in the 65th as that man Doku set up Chris Kalulika to slam the ball home from point-blank range.

The midfielder got down to the by-line and forced a fine near-post save from Corcoran before the fortuitous rebound allowed him to square the ball to his fellow midfielder who made no mistake to hand Belgium the lead.

Jérémy Landu should have doubled it from a corner in the 70th minute but somehow failed to touch the ball home at the back post with the goal gaping.

Ireland made two changes as they set out in search of a way back into this game and the impetus led to a free kick 30 yards from goal, as Matt Everitt was taken down.

Another set-piece, another Ireland goal – that’s three from three matches in this tournament.

James Furlong again the provider, as the Shamrock Rovers defender lifted a tantalising ball over the line before Sobowale acrobatically arrived at the back post to volley the ball home.

And Ireland almost grabbed a winner in the 80th minute as substitute  Ronan McKinley’s left-footed effort from the edge of the box was heading towards the top corner, but it was perfectly plucked out of the air by the tall Belgian keeper to keep it level.

Ireland huffed and puffed for the remainder and the usually composed Belgians looked anything but as the game drew to a close with Ireland piling on the pressure as Omobamidele was sent up front.

But even six minutes of injury time would not allow another clear cut chance as Belgium held on to advance as group winners, while Ireland bowed out.