Spurs were dead and buried at half-time in the second leg at the Johan Cryuff ArenA as they trailed the Amsterdam 2-0 on the night and 3-0 on aggregate after goals from Matthijs De Ligt and Hakim Ziyech.

However, a miraculous comeback, spearheaded by Moura, was completed deep into added time when the Brazilian slotted home a loose ball to spark amazing scenes in Amsterdam.

It continues the remarkable progress for Spurs under boss Mauricio Pochettino, who has led the club further in Europe than any other.

Jurgen Klopp's men may have thought their name was on the trophy after the manner of their comeback against Barcelona, but Spurs will have other ideas and it promises to be a brilliant spectacle in Madrid on June 1.

For Ajax, a brilliant run in this competition, where they beat Real Madrid and Juventus in previous rounds, ended in the most heartbreaking of ways and with their side set to be picked apart in the summer, they are unlikely to have a better chance of winning European football's premier club competition than this.

Tottenham got off to the worst possible start as they fell behind after just five minutes.

Donny Van De Beek had already seen an effort blocked by Victor Wanyama and goalkeeper Hugo Lloris had kept out a deflected shot from Dusan Tadic when De Ligt broke free from his marker to head in a corner.

Son hit a post at the other end as Spurs looked for an immediate response.

Ajax doubled their advantage after 35 minutes when De Beek played in Tadic and his cutback was whipped into the bottom corner by Ziyech. 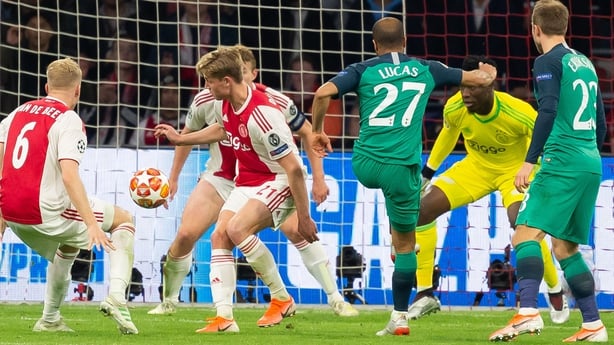 Dele Alli had been denied by a superb save from Onana shortly before Tottenham did pull a goal back in the 55th minute.

A quick break involving Moura and Alli ended with the Brazilian slotting past the keeper to offer the Londoners a glimmer of hope.

It was 2-2 shortly afterwards when Llorente failed to turn in a low cross from close range but Onana spilled the ball and Moura turned sharply to fire into the bottom corner.

Ajax broke clear in injury time but Ziyech's shot was pushed away by Hugo Lloris and Tadic curled the loose ball well wide.

That proved costly as Spurs snatched the goal they needed with almost the last kick of the game.

In the 95th minute, Alli somehow threaded a pass through to Moura and he fired home his hat-trick goal to complete another remarkable European comeback.

They will play fellow Premier League side Liverpool, themselves improbable victors over Barcelona on Tuesday, in their first European Cup final in Madrid next month.