Teenage goalkeeper, Mark Travers has been named in the Ireland squad for the upcoming training camp at Quinta do Lago in Portugal.

Travers, who made his Premier League debut on Saturday for Bournemouth against Tottenham, is part of a 30-man squad who will travel to the Algarve as Mick McCarthy's side begin preparations for the upcoming UEFA Euro 2020 qualifiers.

Ireland take on Denmark and Gibraltar in June and the former Cherry Orchard and Shamrock Rovers goalkeeper, who was named man of the match in the Cherries' 1-0 win over Spurs, has been named alongside fellow goalkeepers Darren Randolph and Keiran O'Hara. 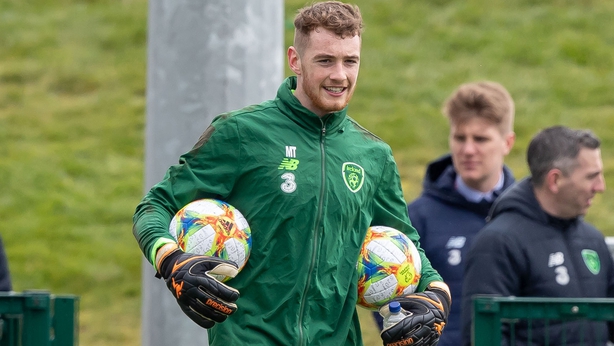 Callum Robinson has returned to the squad, which has a very strong emphasis on attack with seven strikers named to travel to Portugal.

The Preston North End forward missed out on a large chunk of the season through injury but returns to the squad following his return to action at Deepdale for the last few games of the season.

McCarthy will review his options after the final series of English Premier League games on Sunday and the Championship and League One play-off semi-finals, which feature Conor Hourihane, Glenn Whelan, Richard Keogh, Josh Cullen and Ronan Curtis.

Alan Browne and Shane Long return to the squad, having missed the two qualifiers in March through injury, while striker Scott Hogan's recent good form has seen him return having missed out on the final squad for the victories over Gibraltar and Georgia.

Ireland face Denmark in Copenhagen on Friday, 7 June before taking on Gibraltar at the Aviva Stadium on Monday, 10 June.

*Indicates player is on loan