By Ed Leahy at The RSC

Ireland fought back to claim a 1-1 draw with the Czech Republic in their Group A UEFA European Under-17 Championships clash at the RSC in Waterford.

Second-half substitute Václav Sejk scored with his first touch after coming on in the 63rd minute to hand the visitors the lead in this evenly matched encounter.

As the clock ticked towards the 90th minute, Ireland looked to be about to suffer their first defeat of the campaign, but with two minutes remaining, Andrew Omobamidele arrived at the back post to slot the ball home and ensure a point.

Colin O’Brien made one change to the side that started on Friday against Greece with Anselmo MacNulty replacing Timi Sobowale in defence.

The excellent Manchester City defender, Sobowale, picked up a knock in that 1-1 draw in Ireland’s group opener and wasn’t risked at the Waterford City venue.

The visitors XI included four Slavia Prague players, and like Ireland conceded a late equaliser in their opening game, where the led top seeds Belgium 1-0 heading into injury time.

A healthy crowd of 2,613 turned out in the Déise for Ireland’s second group game, which started slowly, with both sides easing into their second game in three days, yet the visitors probably enjoyed the majority of possession, with Ireland pushed back well inside their own half.

The best chance of the opening exchanges fell at the feet of Wolves forward Conor Carty, played in on the left flank with six minutes on the clock. 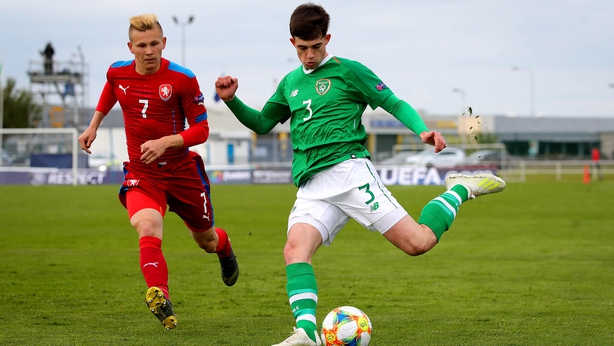 The powerful centre forward ran at the Czech defence and worked his way inside the box before a moment of indecision halted his progress.

Carty put his left foot through the ball but the strike was always rising and the opportunity was gone, with two players inside calling for the ball probably the better option.

With 15 minutes on the clock, Ireland were looking a lot more comfortable with wide midfielder Festy Ebsoele starting to influence on the right flank.

Some tidy play from the Derby County winger led to a free in a good position, but was subsequently smashed against the wall, before a fine ball in from the left was met by Ebosele, but his header back across goal lacked conviction.

Adam Toula came gthe closest for the visitors in the 22nd minute, but the striker scooped his effort over the bar with Gavin Bazunu yet to be tested in the Ireland goal.

The Czech side enjoyed a decent spell midway through the half, getting plenty of joy up the right flank and full back Josef Kozeluh’s well-struck shot flew inches over the Irish crossbar.

Ireland rallied as the half progressed with both full backs apparently encouraged to push on.

And it almost reaped rewards in the 36th minute as McEvoy burst down the right before laying the ball off to Everitt, who cut in off the flank to hit a fine effort goalwards, but the ball just cleared the bar.

Two minutes later, Charlie McCann won the ball on the edge of the box before twisting and turning his way towards goal.

Ireland have equalised at the RSC against the Czech Republic in the European Championships pic.twitter.com/Op9xYjeI9T

Sort of sandwiched between to retreating defenders, McCann went down, calling for a penalty but the referee was alongside play and waved it away immediately.

The game opened up with both sides enjoying time in the opposition final third but neither could really create anything of note, with Everitt’s shot on goal lacking power, while Andrew Omobamidele made an important interception following a dangerous Czech ball in from the left.

Scoreless at the break, the first chance of the second period took 12 minutes to materialise as Carty cut in from the right flank, skipped past two players but again the shot flew over the bar with Adam Stejskal yet to be tested in the Czech goal.

Into the final third, both sides started to take more gambles, moving players forward, while the visitors made the first change of the game with Václav Sejk sent into the attack.

And what a first touch for the Sparta Prague striker who pounced on a loose ball on the edge of the six-yard box before smashing it past Bazunu, who had no chance to stopping it.

Disappointing goal to give away considering Ireland had looked pretty solid in defence but on this occasion, they were unable to clear their lines following a dangerous ball in from the right flank.

Time was on Ireland’s side as they went in search of an equaliser as the Czech side appeared to sit a little deeper, allowing the Irish to enjoy more time in the final third.

Yet for all their endeavours, their was a dearth of clear-cut chances with Ireland unable to get a chance on target throughout.

Festy Ebosele sent off in controversial circumstances for the Ireland U-17 team in the closing minutes of their European Championship game against the Czech Republic pic.twitter.com/2iJRVVZJoO

With two minutes remaining, Ireland were rewarded with a corner kick and, just like their opening game at Tallaght, James Furlong’s delivery would yield a positive result, and this time, it was Omobamidele at the back post who secured a vital point for the home side.

Five minutes of added time allowed Ireland to push for a winner, but their quest was quashed with two minutes to play as a Festy Ebsoele challenge brought a second yellow card for the midfielder as Ireland were reduced to ten men.

Ireland will now face Belgium in their final group game with O’Brien’s side most likely needing to beat the top seeds to make it through to the knock-out stages.