Barcelona striker Luis Suarez thanked former club Liverpool for raising the standard of his game during a three-and-a-half-year spell at Merseyside, but the Uruguayan is focused on knocking them out of the Champions League semi-finals on Tuesday.

Suarez was crowned PFA player of the year in the 2013/14 campaign for leading Liverpool's Premier League title challenge, before they were edged out by Manchester City.

The 32-year-old, who joined Barcelona in 2014, said before the second leg at Anfield that he only had fond memories of his time in England.

"The reason I'm playing at Barcelona, at the elite level, is because of Liverpool," Suarez, who scored in Barcelona's 3-0 first leg victory last week, said on Monday.

"Being at Liverpool helped me in so many ways, it made me more professional, it helped me mature. Having players here with great experience allowed me to be even better.

"Being captain of Liverpool was one of the proudest moments of my career... it's special having enjoyed a number of good years here. I'll always be thankful to Liverpool because of the heritage they have. I have lovely memories of my time here." 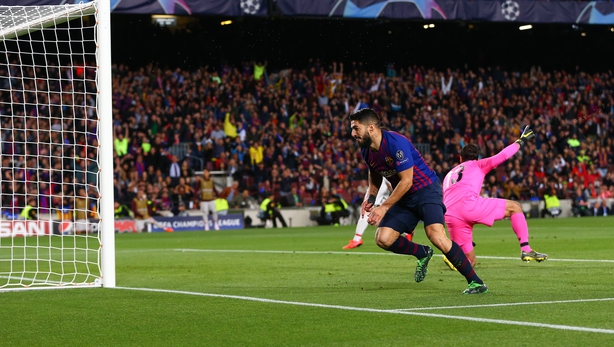 Suarez said that he had no intention of celebrating if he scored at Anfield.

"Celebrating the goal last week, people know the importance of scoring in a Champions League semi-final," Suarez added. "I have all the respect for Liverpool fans, I'm thankful to them and if I score, I won't celebrate it in the same way.

"If I score tomorrow it will mean I can feel relaxed and Liverpool have to score more to qualify."
Suarez is well aware of the atmosphere at Anfield and warned his team mates not to step off the gas against Jurgen Klopp's side, who were runners-up last season.

"We don't have to be complacent entering into this tie. The result doesn't tell the story, they created a lot of chances. It could have been 4-1 or 3-1," Suarez said.

"We played one of our best games of the season last week even though they had opportunities. Now we have to play better as we'll face a really difficult atmosphere.

Follow Liverpool v Barcelona with our live blog on RTÉ.ie and the RTÉ News Now App or watch it live on RTÉ2 and the RTÉ Player from 7pm.