Manchester United's hopes of a Premier League top-four finish were ended after they were held to a 1-1 draw by bottom side Huddersfield Town at the John Smith's Stadium.

Chelsea's 3-0 win over Watford on Sunday took them third, five points clear of United, who failed to take the race for Champions League qualification to the final day, as they trail Tottenham Hotspur in fourth by four points with just one game left.

Looking for a first win in five in all competitions, United made a fast start, and took the lead in just the eighth minute through Scott McTominay.

Huddersfield, who had managed just nine goals from open play prior to Sunday's match, grew into the contest and almost levelled through Karlan Grant, before Paul Pogba headed against the crossbar three minutes before the break.

Alexis Sanchez, making his first United start since 2 March, was replaced early in the second half, before Isaac Mbenza's first-ever Premier League goal got the hosts level on the hour mark.

Pogba again hit the crossbar late on as United looked for a winner, but Huddersfield held on for just their fifth Premier League point from the last 72 available, with United having won just two of their last 11 matches in all competitions.

Ashley Young admitted the draw "felt like a defeat", but was unable to pinpoint where it has gone wrong for the club after a bright start under Solskjaer.

"I'm not too sure what it is, right now we can't put our finger on it," Young told Sky Sports.

"It's obviously a disappointment we can't get into the top four, we have to go away, think about how the season has gone and come back and be prepared to go again. 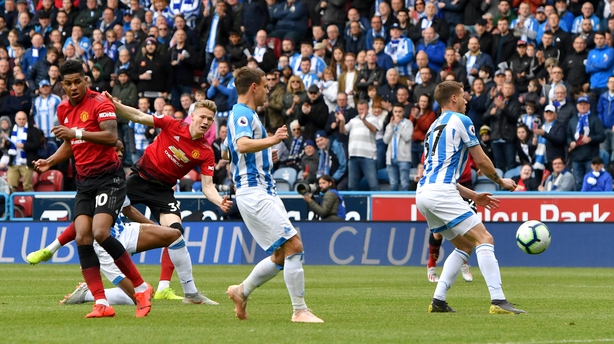 "It's a massive blow for a club like Manchester United. I've said all along fighting for the top four is not what we want to be talking about, we should be winning trophies, winning titles.

"That's the disappointment but I think Ole and the staff will be prepared over the summer and ready to go for next season."