Neil Etheridge says the Cardiff players want manager Neil Warnock to stay at the club following their relegation from the Premier League.

Cardiff's instant return to the Sky Bet Championship was confirmed by a 3-2 home defeat to Crystal Palace, the Bluebirds exiting the top flight alongside Fulham and Huddersfield.

Warnock has one year left on his Cardiff deal and, having consistently said that he would like to see his contract out, he responded to relegation by saying he will "let things settle" in terms of discussing his future.

Owner Vincent Tan made a rare visit to Cardiff on Saturday, and it remains to be seen whether the Malaysian businessman will keep the 70-year-old Yorkshireman at the helm after a difficult campaign.

"His stats speak for themselves - eight promotions," Cardiff goalkeeper Etheridge said of Warnock. He's a fantastic man-manager and knows exactly what to do.

"He's been in the game long enough to know what players need, whether it's a kick up the backside or an arm around them. As players, we want him to stay. But that's a decision for him, not for us, and it's something he'll reflect on this summer."

Cardiff's fate was sealed on the penultimate weekend as Wilfried Zaha,  Michy Batshuayi and Andros Townsend scored for visitors who were devastating on the break.

A Martin Kelly own goal and a stoppage-time strike from Bobby Reid offered hope of salvation but, in truth, Cardiff have battled against the odds since their surprise promotion from the Sky Bet Championship last season.

Warnock has had comfortably the lowest budget in the division to work on, and tragedy struck in January when Emiliano Sala was killed in a plane crash two days after Cardiff announced the Argentinian striker as their €17.6m record signing.

Really sad day for everyone involved at the club. Throughout the season everyone at the club and every player gave everything they had! We fell short and it's extremely hard to take. The supporters every week have been behind us 💪🏽 Thank you for the amazing support and voice! pic.twitter.com/l0x3ujUajZ

"We gave everything we could throughout the season," Etheridge said. "A lot of people wrote us off long before these final two games.

"We fought hard to the end, but unfortunately we fell short. The Premier League is a tough league to stay in. We need to take time off in the summer now and look forward to next season in the Championship. Thankfully, we've got a great squad and togetherness in the team and the club."

Palace's win was their ninth on the road, incredibly five more than the Eagles have managed at Selhurst Park.
Former Cardiff loanee Zaha opened the scoring with his 10th of the season, his best Premier League return, and it is telling that nine of those goals have come in away games.

"He (Zaha) probably gets a bit more freedom (away from home) as there is no doubt that it is harder for teams to sit in and to double up all the time," said Palace manager Roy Hodgson.

"I think he is improving all the time anyway. I think his understanding of when he needs to release the ball, when he does need to be doing all the wonderful tricks he is capable of doing, and that is something which in recent weeks has been really good for me and my coaching staff to see.

"He has got the reward - five or six of those goals have come in the last six weeks, because he has been scoring regularly." 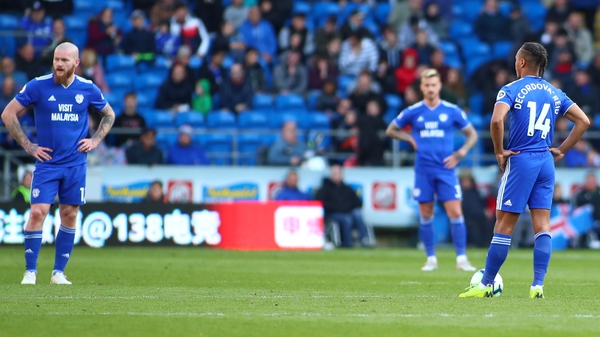