Alexandre Lacazette and Pierre-Emerick Aubameyang hit the goals as Arsenal came from behind to beat Valencia in the first leg of their Europa League semi-final at the Emirates Stadium.

Unai Emery's side will head to the Mestalla next week defending a 3-1 lead after the France forward netted a first-half brace, with strike partner Aubameyang adding the gloss in the final minute.

Mouctar Diakhaby had headed in a deserved opener for Valencia but the LaLiga outfit have it all to do in the return leg.

Lacazette scored Arsenal's goal as they crashed out at this stage of the competition last season and also for Lyon in a semi-final defeat two years ago - this time around he will be hoping his double is enough to help the Gunners into the final in Baku on 29 May.

Heading into the game on the back of three consecutive Premier League defeats, winning the Europa League appears to now be Arsenal's best chance of securing a return to the Champions League for next season.

But it was Valencia who would start the game brightly, captain Daniel Parejo dinking in a free-kick for Rodrigo to cross to Ezequiel Garay - only for the defender to clear the crossbar with a close-range chance.

Arsenal did not heed that warning and fell behind soon after, Diakhaby heading in from two yards out after Rodrigo headed a corner back across goal. 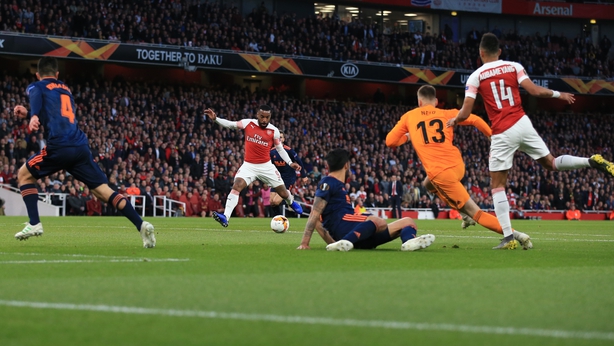 Ainsley Maitland-Niles almost gifted Marcelino's side a second with only 15 minutes on the clock.

The wing-back attempted to head a loose ball back to Petr Cech after the goalkeeper had pushed Parejo's shot away but could only direct it onto the boot of the onrushing Goncalo Guedes for the ball to drop over the crossbar.

Just as Arsenal looked like getting overrun, they equalised completely against the run of play as Aubameyang broke clear and, with Valencia goalkeeper Neto opting to rush from his line and ending up nowhere near the ball, had the presence of mind to poke a pass for Lacazette to tuck home.

Seven minutes later and Arsenal were ahead, Granit Xhaka crossing for Lacazette to head in his 18th goal of the season - Neto again at fault as he could only push the ball onto the post with referee Clement Turpin confirming it had crossed the line.

Aubameyang should have done better with his first clear opening of the night but shot into the ground and over the bar from another Xhaka cross.

Valencia responded after the interval and were back on the front-foot immediately, Diakhaby seeing his long-range drive blocked behind as they pushed for an equaliser.

Arsenal slowly wrestled back a level of control and Lacazette should have sealed his hat-trick but instead passed up two fine opportunities.

He made poor contact with a header from an Aubameyang cross before failing to beat Neto from five yards out soon after.

Marcelino introduced Kevin Gameiro off the bench in the hope of finding an equaliser and he drew a smart save from Cech, potentially playing his last game on English soil before his retirement.

But, with the Arsenal defence soaking up any further pressure, the home side extended their advantage as Aubameyang tucked home Sead Kolasinac's cross at the back post.