Tottenham manager Mauricio Pochettino is dreaming "to infinity and beyond" as he prepares his side for the Champions League semi-final first leg against Ajax.

Pochettino says he is already "living the dream" in taking Spurs to the last four of this competition for the first time in their history, but he borrowed Buzz Lightyear's well-known catchphrase to urge his team to go for glory.

"I am living my dream, I am already living it - to be in the semi-final with Tottenham," Pochettino said.

"It was a dream five years ago and we are living it.

"Always you must dream with the moon if you want to get something from the sky. You need to set your dreams to infinity and beyond.

"If you achieve things it is because you dream. When you dream you have it in your mind and then you can get it."

To be at this stage of the competition with their new Tottenham Hotspur Stadium less than a month old represents what Pochettino reckons is a historic feat.

He believes that competing for top European honours while building a £1billion stadium is something no other club has ever done.

"What is a thing we feel most?" he said.

"Proud, because we can develop two different things in football that no other club could do: the most unbelievable facilities and then put the club on the sports side in a very competitive place, reduce the gap to the top four, be contenders and play Champions League in three or four years.

"Normally it's to move to the new stadium and then be competitive and look to play in the Champions League. Look how far ahead we are.

"Maybe we didn't win a trophy, but what we achieve as a club is massive.

"Maybe more than winning a trophy. I don't think anyone in history has achieved what Tottenham have made."

If Spurs getting to the last four of the Champions League is a dream for Pochettino, the condition in which they arrive is more of a nightmare.

Tottenham are short of key attacking players in Harry Kane and Son Heung-min, while a lengthy injury list and packed fixture schedule is taking its toll.

Pochettino is counting on the occasion helping his side through.

"It must be important," he added. "The energy, the semi-final, the chance to play a semi-final for Tottenham does not happen often.

"We are in circumstances that are impossible to change and we must be ready. 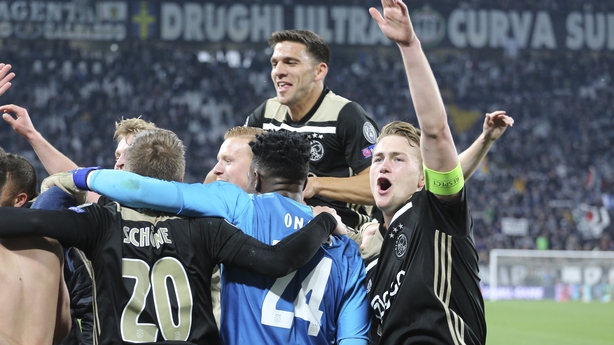 The fact that Ajax had their domestic fixture cancelled at the weekend to aid their preparation was another issue to frustrate Pochettino, whose players had to contest a London derby against West Ham.

Ajax coach Erik Ten Hag, whose side have beaten Real Madrid and Juventus in the last two rounds, hinted Spurs cannot complain due to the amount of television money they receive.

He said: "There are always different circumstances. We play in the Eredivisie, we get €10m from TV and Tottenham, I don't know how much they get. They get a lot more.

"Is that still unfair for them or for us? Everyone has different circumstances, you just have to deal with them. That's the way it is."

Follow Tottenham v Ajax on Tuesday night with our live blog on RTÉ.ie and the RTÉ News Now App or watch it live on RTÉ2 and the RTÉ Player from 7pm.