Ronan Finn did the needful, but precocious playmaker Brandon Kavanagh stole the show as Shamrock Rovers returned to the joy of a victory in Tallaght before 3,920 fans.

With Dundalk hammering Waterford, the Hoops were compelled to match them and they secured three crucial points albeit after a scare or two.

This was intriguing fare. Pat's played 3-5-2 here, boss Harry Kenny deciding to crowd the middle and pressurise the hosts' defence with two up top. In the main it worked but they still created little and fell behind before the interval.

That said, Saints opened Rovers up with surprising ease on five minutes. Ex-Hoop Mikey Drennan was found by another in Simon Madden but he made a poor connection from  ten yards or so out.

Rovers had an even better chance on 11 minutes but the returning Lee Grace headed wide from Finn's excellent cross.

Kavanagh, pivotal after jumping off the bench Friday in Dundalk, should have been more clinical after a superb Trevor Clarke cross midway through the half.

The outstanding Kavanagh, who could only have impressed former team-mate Graham Burke in the main stand, did not score the opener but it was all about him, involved in a quickfire passing move that involved a one-two with Finn. The teenager engineered space in the box and he coolly found Finn who side-footed home. 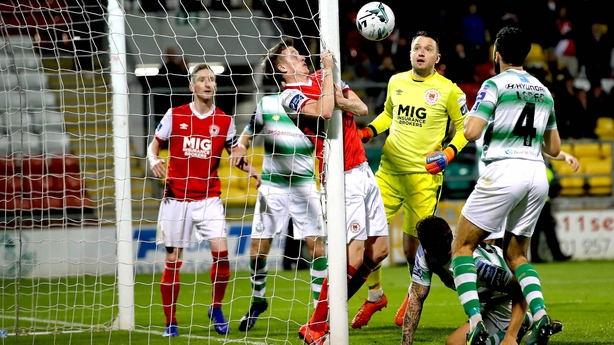 Rovers began the second period with vigour but Roberto Lopes will wonder how he didn't head in a second from a lovely Jack Byrne free-kick.

Pat's introduced Chris Forrester after Rhys McCabe went off after a heavy challenge left him grounded and dazed. Saints enjoyed a good spell and Ian Bermingham forced Alan Mannus into a comfortable save on 65 minutes.

Dan Carr, just off the bench, had his shot blocked shortly afterwards; and on 74 minutes he shanked wide after a delightfully deceptive Byrne dink to Aaron Greene.

Greene then headed off the bar after Brendan Clarke flapped at a Rovers corner.

Clever play from Darragh Markey put Dean Clarke in but Mannus saved as time ran out for the visitors. Wasteful Carr hooked wide in injury time but Rovers, somewhat nervously, held out.