By Gavin McLaughlin at The RSC

Jordan Flores opened his Dundalk account in stunning fashion as the Lilywhites cruised to their fifth successive league win against ten-man Waterford at the RSC on Monday night.

In front up through Michael Duffy's first-half free-kick, Vinny Perth's side doubled their advantage in the 56th-minute when the former Wigan midfielder's left-footed screamer whizzed past Matthew Connor and almost tore the net off the posts.

Waterford, who started the second-half brightly, were left stunned by the effort and their hopes of getting back into the game were all but ended six minutes later when Bastien Hery was dismissed for two quick fire bookings. Duffy put the seal on things with his fourth goal in three games before the death.

Despite playing fixtures just 72 hours earlier, both sides showed few changes with Waterford boss Alan Reynolds opting for the same XI that performed well in the scoreless draw with Bohemians at Dalymount Park. His opposite number made just two alterations with Dean Jarvis and Brian Gartland replacing Dane Massey and Daniel Cleary respectively.

The heavy rain in the south east led to difficult  conditions but the greasy surface at the RSC suited the champions who controlled the opening 20 minutes. Duffy was denied by Matthew Connor's fine block in the ninth minute after breaking through on the inside left and Flores, a 15th-minute substitute for the injured Jamie McGrath, also went close after combining with Patrick Hoban in the build-up.

The Blues, with Ismahil Akinade carrying out his defensive duties well on the left-flank, stemmed the tide with Hery and Zack Elbouzedi beginning to influence things a lot more as the half wore on. Despite that, Gary Rogers was relatively untroubled, watching a fizzing Akinade effort fly over before getting a vital touch to Rory Feely's cross from the right before it could reach the Waterford number nine. 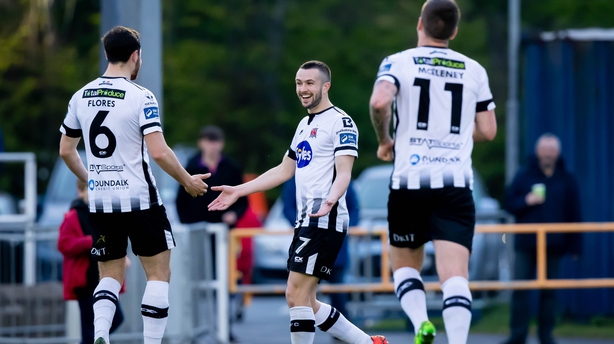 It looked like the sides would go in all square at the break but Duffy's free-kick from the corner of the penalty area evaded everybody and nestled into the corner of Connor's net to give Dundalk the lead and they almost went in two goals got the good but Connor scrambled off his line to deny Daniel Kelly.

The hosts started the second half on the front foot but Flores' wonder strike halted their momentum and Hery's indiscipline, which saw him pick up two bookings in the space of as many minutes, leaving referee Derek Tomney with little option but to send him off, killed off their chances of a comeback.

Dundalk saw the game out in cruise control and Hoban was denied by another Connor save but the 'keeper was left helpless when Duffy picked up the ball outside the penalty area before arrowing a fine strike into the bottom corner to keep Dundalk hot on the heels of league leaders Shamrock Rovers.