Bohemians' second-half display ensured their picked up a deserved 2-0 win at Derry City in the SSE Airtricity League Premier Division.

Goals from Danny Mandroiu and Dinny Corcoran capped a super performance after the break by the Gypsies.

The win for Keith Long’s men sees them move six points clear of the Candystripes and four points behind leaders Shamrock Rovers.

Soon after some neat skill by Kevin Devaney, saw him skip away from a few challenges, but his left footed strike was superbly tipped around the right hand post by City keeper Peter Cherrie.

City hould have broken the deadlock on 20 minutes as Barry McNamee’s left wing free-kick found Greg Sloggett at the back post, but the ex-UCD made failed to get enough on his close range header.

On 39 minutes a clever one two with Junior Ogedi-Uzokwe and McNamee, ended with the Derry captain laying the ball off to Ciaron Harkin, but the midfielder’s 20 yard drive was well off target.

The visitors took the lead on 53 minutes after a quick passing move ended with Dinny Corcoran’s clever passing finding Danny Mandroiu, who cut in from the right before firing high past Cherrie. 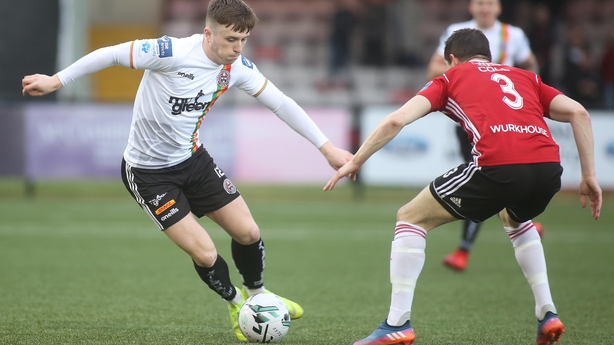 Minutes later Mandroiu should have had a penalty when it looked like Patrick McClean pulled the midfielder down inside the box, but referee Robert Rogers waved play on, much ot Bohs frustration.

The woodwork came to Derry’s rescue on 58 minutes as the impressive Grant got in behind the City defence, but his well hit drive rattled the post.

Dery should have equalised on 67 minutes as Jamie McDonagh’s super right wing cross found an in-rushing Sloggett, but just like in the first half the midfielder’s point blank range header failed to trouble Bohs keeper James Talbot.

Bohemians sealed the points on 80 minutes as Corcoran  slotted the ball into an empty net, after he skipped around the out-rushing Cherrie, after cutting out Sloggett's under hit back pass.

In the closing stages Derry should have pulled a goal back by Ogedi-Uzokwe’s close range effort was straight at Talbot.

Deep into stoppage time Bohs went close to adding a third as Corcoran effort came back off the crossbar.