Unai Emery was proud of his Arsenal players after they reached the semi-finals of the Europa League with a victory away at Napoli.

Leading 2-0 from the first leg, the Gunners will now face Valencia in the last four after Alexandre Lacazette's 36th-minute free-kick was enough to seal victory on the night and a much-deserved 3-0 aggregate win over a Napoli side far from their best.

For all the criticism often aimed at the Arsenal defence, they have now kept six clean sheets in their last seven games and not conceded in consecutive away matches across all competitions for the first time since January 2017.

And Emery was pleased with the performance of his team in what is often a hostile environment at the San Paolo Stadium in Naples.

"I am very proud of my players and of our work," he said.

"We show the players have the habit to play matches against good teams, in a good atmosphere, and show big personality.

"We wanted to keep the ball more but we didn't do all we wanted. Positioning we were very good and doing good pressing."

The Gunners fell at the last-four stage to Atletico Madrid a year ago and LaLiga opposition again stands in their way of reaching the final in Baku on 29 May with Emery's former club Valencia up next. 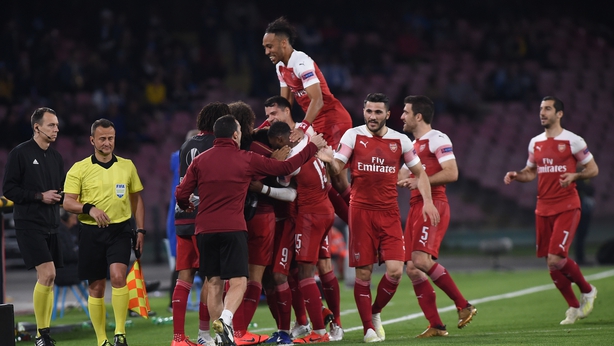 Emery is once again proving he is the master of this competition - no manager has won more knockout games in the Europa League than the Arsenal head coach, who won three consecutive titles while at Sevilla.

"I grew up a lot in this competition," added the Spaniard.

"The Europa League gives us a big opportunity to do something important, to play in the Champions League.

"It's a title and gives us the possibility to play in the Champions League when in our domestic league a lot of teams are trying to take it.

"The Europa League is for us now with Premier League a very important competition."

One sour note for Arsenal was an injury suffered by Aaron Ramsey just before Lacazette's free-kick with Emery not drawn on whether the midfielder - who will join Juventus on a free transfer when his contract expires this summer - had played his last game for the club.

"It is a muscular injury," Emery explained.

"Normally it is going to be some weeks outside the team. But he was in a very good moment and working very well but we have other players ready and waiting."

Napoli threatened for a small part of the first half but, over the course of the two legs, were well-beaten - with Carlo Ancelotti praising Arsenal's performance.

"Arsenal is an intelligent team," he said.

"They play well in front and defend together. Not a team that play fantastic football but they are a really intelligent team.

"They did a good job, deserve the victory and I hope the best for them in the Europa League."