Derry City will be looking to narrow the gap at the top of the table to five points as they take on league leaders Shamrock Rovers.

Declan Devine's side sit in second place, eight points off the Hoops, and will be hoping to maintain their recent good form in front of their home crowd tonight.

The two sides met in Tallaght early in the season with Rovers taking the points following a 2-0 victory.

The RTÉ camera's will be on hand to bring you the game live with coverage starting at 7:30pm on RTÉ2. 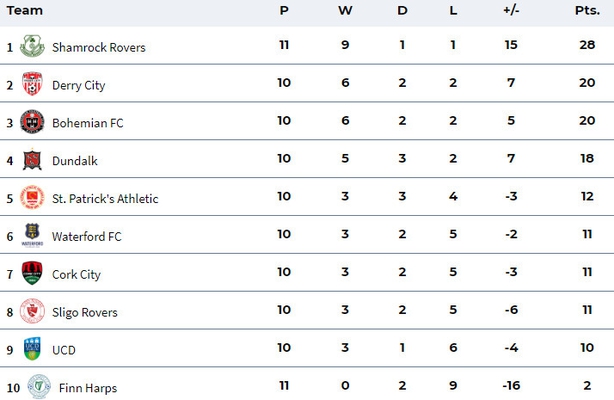 Derry City: Jamie McDonagh is suspended, while Aidy Delap is unlikely to be used as he recovers from injury.

Kevin Deery (Derry City asst. manager): "Shamrock Rovers are an excellent side but it’s great to be back at the Brandywell where we should have a great crowd behind us and a fantastic surface to play on."

"We were beaten at Tallaght earlier in the season but there was very little in it. This is an opportunity to show that the team is improving and we can compete with the top sides in the country."

Stephen Bradley (Shamrock Rovers): "We’ve just been concentrating on the next game every time. We put the game and the result on Friday behind us. We put it to bed very quickly and concentrate on the next performance. That’ll be the case again going to Derry.

"They’re having a really good season and Declan has them playing some good football. I watched them on Monday night against St Pat’s and I thought they were excellent. It’s going to be a difficult game but it’s a game I believe we’re focused for and ready to go and get three points.

"The [artificial] pitch suits us and I don’t see it being any different on Friday, it’s a nice, big pitch that’s good for the way we play. This will be one of our toughest games of the season but the players at the moment feel like they can play anyone, home or away and go and get a result." 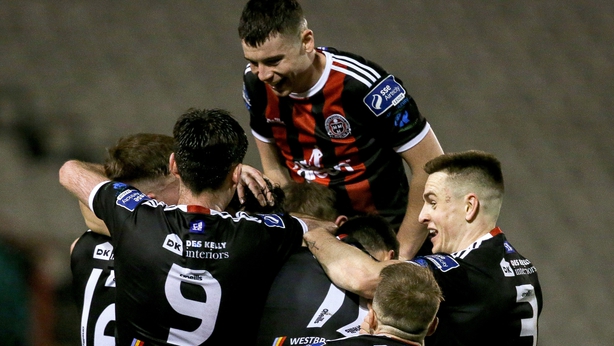 Bohemians will be looking to return to winning ways as they welcome UCD to Dalymount Park for tonight's Premier Division clash.

The Gypsies suffered a last-gasp defeat to Dundalk on Monday night and will be looking to remedy the situation with a victory over the Students as they attempt to stay in touch with Shamrock Rovers.

UCD have shown some form in recent weeks and will be hoping to build on their excellent result from Monday night as they beat Cork City 2-1.

UCD: Conor Davis will be in the matchday squad, after his recovery from a knee injury. Long-term absentee Evan Osam is the only player not available for the Students.

Keith Ward (Bohs) said: "UCD are 10 games in now and they will know a lot about themselves now and about the division compared to when we last played them. They have come on a lot already and will keep improving. They like to play the right way and will be tough opposition.

Collie O'Neill (UCD): "We dug in deep against Cork City and kept going until the last minute. We dominated possession in the second half, didn’t panic, and completed a great come back to secure the three points. Perhaps we got a bit lucky with the first goal, but Yoyo (Mahdy) did well to hit the target and force the mistake. Then Gary (O’Neill) was his normal self and he stepped up, held his nerve and calmly slotted it home to secure a big three points." 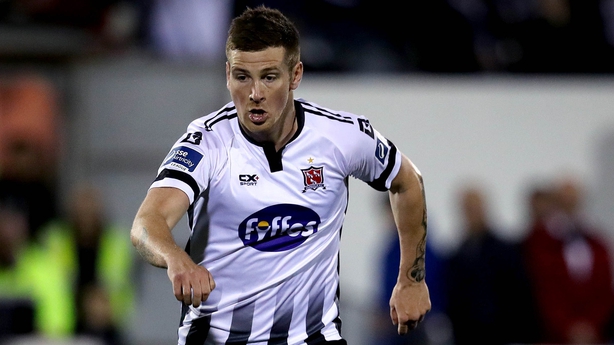 Finn Harps travel to Dundalk still in search of their first win of the season, while the home side will be looking to stay in touch at the top of the table.

Harps will take heart from the 1-1 draw that the sides played out earlier in the season, but Dundalk should be confident of taking all three points despite their mixed start to the season.

Dundalk: Robbie Benson remains out with a broken leg, Sean Murray is also out with a groin problem and Stephen Folan misses out with a knee injury. Chris Shields and Patrick McEleney made their return from injury on Monday.

John Gill (Dundalk): "Getting Patrick McEleney and Chris Shields [back] gave everyone a lift. We knew that we would run into some difficulty with the lads out but we have them back now.

"We will have a tough game against Finn Harps. They drew with us up in Finn Park and they will come here and will be hard to beat. The onus is on us to take the game to them. We are taking it one game at a time and then we will focus on the other games. We are looking forward to the game and we want to get the three points."

Ollie Horgan (Finn Harps): "Conceding early would leave us chasing the game and against a team of Dundalk’s pedigree that would be very difficult for us. We trained well on Monday and Tuesday and the lads are determined to keep plugging away in the belief that positive results will start happening for us.

"The standard in the Premier Division has definitely improved from when we were last there in 2017. It is a massive step up from the First Division. But it’s great to be playing against the sides like Dundalk and our lads are looking forward to giving it a right good go at Oriel Park." 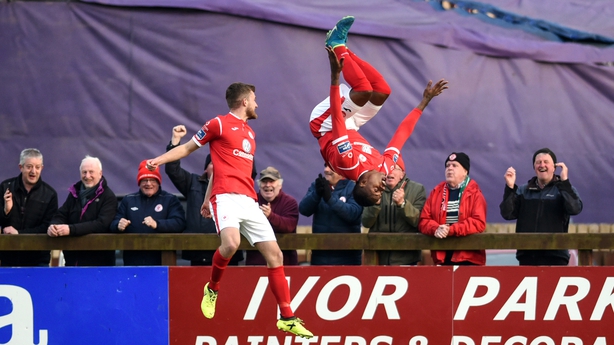 Sligo Rovers go in search of a second away win of the season as they travel to Dublin.

Liam Buckley returns to take on his former side, knowing that a win would see his team leapfrog the Saints in the table.

St Pat's will be hoping to bounce back from a disappointing 3-1 defeat to Derry, knowing that a victory would keep them in the top half of the table.

St Patrick's Athletic: Harry Kenny will be without defender Kevin Toner who serves a one-match suspension following his sending off against Derry.

Midfielder Jamie Lennon faces a late fitness test on a groin injury, while Pat's are boosted by the return of midfielders Chris Forrester and Brandon Miele along with Mikey Drennan and Dave Webster following their respective suspensions.

Harry Kenny (St Patrick's Athletic): "Looking back to our earlier game in the season against Sligo, we came out on top in a really tight game thanks to Mikey's late header. They had some chances and we had a few and luckily we took one late on. We can expect another tight game on Friday as Sligo have picked up a few good results lately and will come here and make it difficult for us."

Liam Buckley (Sligo Rovers): "This is an important game for both sides, we’re a point behind Pat’s and getting up the table is our priority.

"You can’t ask players to play Friday-Monday three times or eight games in a month, however you look at it, so over this period you will see changes by managers.

"That said, we’re adapting our training so we’re planning as best we can and the lads are really bought into what we’re trying to do. They are looking forward to this game and in the first meeting there was nothing really in it." 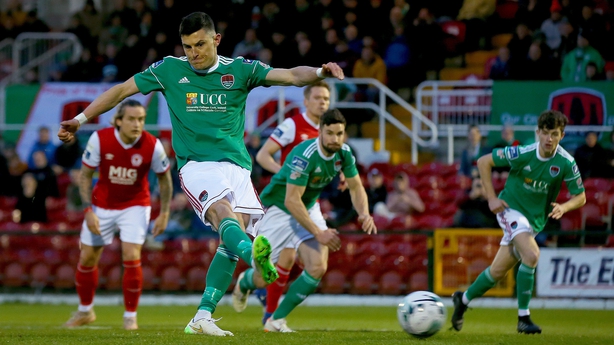 Both sides will be looking to kick-start their season in this Munster derby.

City come into the game looking to halt a run of poor results, which saw them concede late on in both of their games last weekend: drawing 1-1 at home to St Pat’s, before losing 2-1 to UCD on Monday.

Waterford, meanwhile, had to settle for a scoreless draw with Sligo on Monday, a result that leaves the Blues in the bottom half of the table.

Waterford FC: Kenny Browne is continuing his recovery from injury but misses out again.

Alan Reynolds (Waterford FC): "Cork were beaten by a late goal last Monday so they’ll be looking to put that behind them. But we were excellent down in Turner's Cross at the start of the season and we thoroughly deserved the three points. That’s the kind of performance we’re going to need again to look for the three points."

John Caulfield (Cork City): "We are going through a difficult spell, but I believe in these lads. Do I think we should be higher up the table? I do. Do I think we can climb up the table and get into the top four? Absolutely. We are totally determined that we will turn it around.

"Waterford have a very strong squad and excellent players. The RSC is always a difficult venue for us, so we know it will be one hell of a battle and we have to be ready for it. We are going down there to try and get a positive result."