Ajax stunned Juventus to reach the semi-finals of the Champions League with a 2-1 comeback win in Turin.
Cristiano Ronaldo gave Juventus the lead after 28 minutes with a record 126th goal in the competition, his ninth in seven meetings against Ajax.

Ajax will meet Manchester City or Tottenham in their first Champions League semi-final for 22 years and many will consider them underdogs again.

But after eliminating Real Madrid, champions for the previous three seasons, and now Juventus, Erik Ten Hag's exciting young side should not be underestimated.

In what was to prove a hugely entertaining contest, both sides were slow to start.

Emre Can almost embarrassed Andre Onana when he charged down the Ajax goalkeeper's kick and the ball flew wide of a gaping goal.

David Neres found space in a crowded penalty area and his deflected shot squirmed through to Van De Beek, who fired over the crossbar at full stretch.

Paulo Dybala saw his volley held by Onana in Juventus' first meaningful attack, but the hosts were soon ahead through a familiar source.

The unmarked Ronaldo met Miralem Pjanic's corner with a trademark thunderous header as Ajax complained of a foul on Joel Veltman.

Clement Turpin went to the sidelines for a VAR check, but the French referee's closer inspection showed that Veltman's team-mate De Ligt had actually pushed him to the ground.

But Ajax were level within six minutes when Hakim Ziyech's shot fell into Van De Beek's path and the midfielder made the most of his good fortune with an assured finish into the bottom corner. 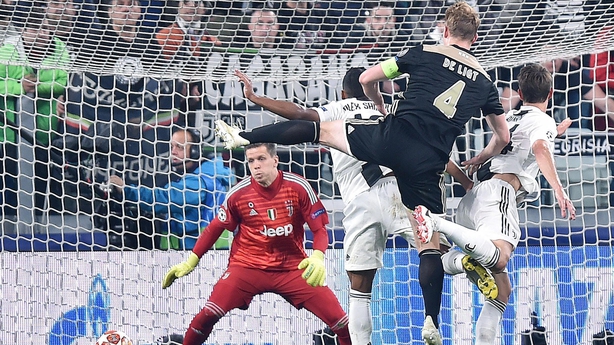 The second half was on a knife edge and Ajax were determined to send men forward in search of a goal that would leave Juventus needing two and a mountain to climb.

Juventus heaved a huge sigh of relief when Neres broke through and Van De Beek set up Ziyech inside the penalty area.

Wojciech Szczesny thrust out a strong left arm just as the ball appeared to be going past him and Juventus survived.

Van De Beek was on the end of further breathtaking Ajax approach play, but again Szczesny was equal to the task and tipped the ball over the crossbar.

Juventus substitute Moise Kean fired wide after being slipped through by Ronaldo, but Ajax continued to call the tune and Pjanic stuck out a foot to deny Ziyech the simplest of tap-ins.

The pressure finally told after 67 minutes as De Ligt towered above Alex Sandro and Daniele Rugani to head Lasse Schone's corner past a helpless Szczesny.

Ajax should have scored more in the closing stages as Neres scuffed Dusan Tadic's pass wide and Ziyech saw his pile-driver disallowed for offside.

But Juventus produced few late scares, even if an unsuccessful penalty appeal went to VAR again, as Ajax became the first Dutch side to reach the last four of the Champions League since 2005.