Bohemians made the journey back to the capital from Ballybofey with all three points as a single Daniel Grant goal was enough to overcome Finn Harps in a drab encounter.

Seven minutes before the break, Grant opened the scoring with an untidy goal. Keith Ward made commendable headway down the right and although his cross was headed away, Grant, from close range, shot into the ground beneath Ciaran Gallagher who had spread himself in an attempt to block.

That goal brought life to the Dalymount Park side, who until then had failed to get into any sort of rhythm. However, two minutes after the goal, there was almost another when Dinny Corcoran trickled an effort off the base of the Harps post and Gallagher saved bravely from Ward’s follow-up.

All in all, but for those few incidents at the end of the first half, there was little for the paltry crowd in the region of 300 to get excited about.

A tepid opening saw just the one shot on goal as Harps striker Nathan Boyle turned to shoot and in turn forced James Talbot in the Bohemians goal to react swiftly and get behind the effort.

Ciaran Gallagher in the Harps goal made a superb fingertip save from a stinging Kevin Devaney half-volley from the edge of the penalty area on 35 minutes in what was Bohemians first shot on target.

That was, on reflection, the spark for the visitors, who finished the half impressively to go in a goal to the good at the interval.

In the second half, neither goalkeeper was tested until the 80th minute. Then, Corcoran improvised to shoot from close range and Gallagher did well to save.

There was an appeal in the 88th minute for a penalty for Harps when Aaron Barry did have both hands on the back of substitute Mikey Place. Referee Damien McGrath was having none of it.

In the last of four minutes injury time, Boyle, from a cross from Tony McNamee cross, drew a save from Talbot, but Bohs had done enough for a game that won't live long in the memory. 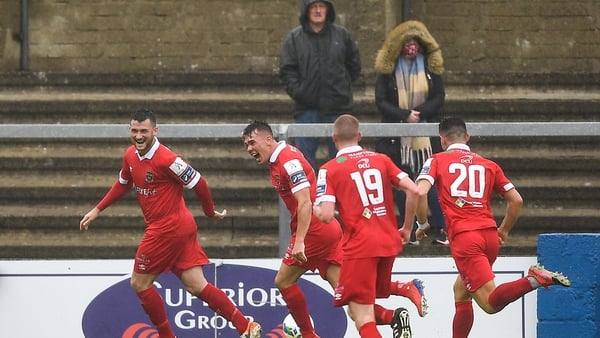