Jack Byrne of Shamrock Rovers has been named SSE Airtricity League/Soccer Writers’ Association of Ireland Player of the Month for March.

The attacking midfielder was instrumental as the Hoops won five of their six Premier Division fixtures – drawing the other – and also earned a call-up to the senior Republic of Ireland squad for the recent Euro 2020 qualifiers with Gibraltar and Georgia.

Byrne, 23, caught the eye of manager Mick McCarthy with a sublime performance, including an excellent goal, against Sligo Rovers and followed up his international duty with a fine brace at home to UCD. 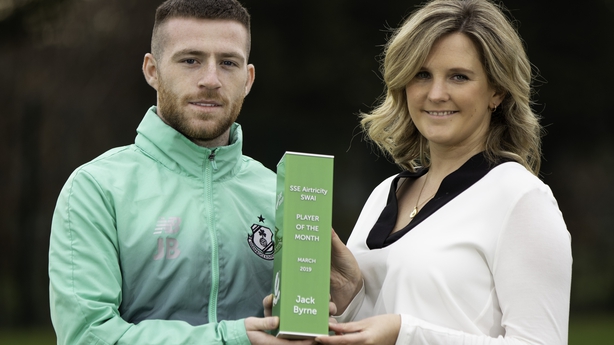 "I wouldn’t be here talking about being called up for Ireland or getting this award if it wasn’t for how good we have been doing this season," Byrne said.

"Last month was a great one for us, we didn’t lose a game, and it was important that we carried that on against Cork City last week."

Rovers, led by head coach Stephen Bradley, are now eight points clear at the top of the Premier Division and will be looking to maintain that lead at home to Waterford at Tallaght Stadium tomorrow night.