Republic of Ireland international James McClean found the net for Stoke City, but the Potters finished with nine men and suffered a 3-1 defeat on the road against Swansea City.

Daniel James and Mike van der Hoorn put the Swans 2-0 up, before McClean pulled a goal back in first-half stoppage time.

Bruno Martins Indi and Tom Edwards were sent off early in the second half for fouls on James before Oli McBurnie added a third for Swansea late on.

Marcelo Bielsa's side returned to second spot with a 2-0 win at 10-man Preston after Saturday's defeat at Birmingham and now sit two points ahead of third-placed Sheffield United.

The Blades travel to Birmingham on Wednesday, while leaders Norwich - who are five points clear of Leeds with a game in hand - host Reading.

Bamford opened the scoring at Deepdale after 62 minutes when his superb low drive found the bottom corner from 25 yards.

By then Preston were already down to 10 men as Ben Pearson had been dismissed for a foul on the striker four minutes into the second half. 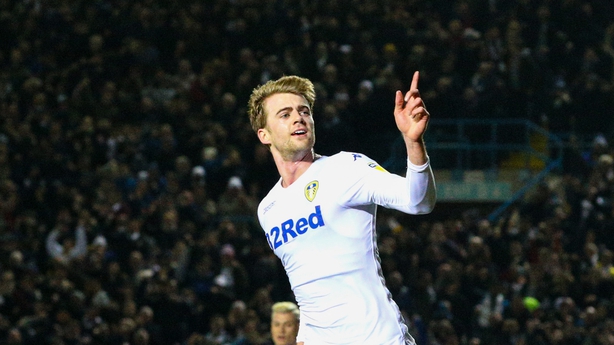 Bamford's header from 12 yards sealed the points for Leeds with 14 minutes remaining.

The striker, who missed most of the first half of the season with a knee injury, has now scored nine times this term, with eight of those since he returned in mid-December.

Bristol City survived a West Brom fightback to win a 3-2 thriller at Ashton Gate and move up to fifth.

The Robins raced into a 3-0 lead inside 20 minutes before Albion tried to mount a second-half recovery.

Josh Brownhill cashed in on sloppy Baggies defending to score after 62 seconds and Andi Weimann added a second on 16 minutes.

Two minutes later Jack Hunt scored his first goal for seven years but Dwight Gayle pulled a goal back for the Baggies just after the break.

Jay Rodriguez made it 3-2 with 16 minutes left but Bristol City hung on to inflict successive defeats on Albion, who sit fourth.

Midfielder Rothwell struck in his 32nd appearance for Rovers before Bradley Dack added a late second as Derby dropped to eighth, three points adrift of the top six.

Middlesbrough cashed in to leapfrog them in the table and stay in touch with the top six as Ashley Fletcher's brace secured a 2-0 win at Bolton.

The Owls ran out 3-0 winners, with Marco Matias' brace and George Boyd's strike after the break further damaging Forest's own top-six challenge.