Midfielder Naby Keita looks like he is finally starting to deliver on his £53million price tag after scoring for the second successive match to put Liverpool in control of their Champions League quarter-final with Porto.

The Guinea international netted his first Anfield goal in the 2-0 win over the Portuguese visitors five days after his maiden strike in the Premier League at Southampton.

Keita put in arguably his best performance in a red shirt since joining in the summer and after a difficult settling-in period appears to be fulfilling the faith Jurgen Klopp placed in him in agreeing a deal with RB Leipzig 12 months before he actually arrived.

Roberto Firmino's 14th goal in the competition for the club, drawing level with Mohamed Salah and Ian Rush, doubled Liverpool's lead but the only disappointment on the night was that they did not finish the job as they had done last season when they won the first leg 5-0 in Porto.

It was not all routine, however, as there were a couple of rare handling errors by goalkeeper Alisson Becker, one which led to a VAR call after the ball hit Trent Alexander-Arnold's arm on its way out of play, and another video review when the ball hit the arm of Dejan Lovren, making his first start in three months.

On both occasions the answer was in the negative but it emboldened the visitors enough to give them hope there is still something left in this tie next week, especially as Moussa Marega could have had two goals which would have put an entirely different complexion on things.

While Marega was wasteful in front of goal, flashing a shot wide in the third minute and then volleying straight at Alisson in the first half, Liverpool were more clinical.

None more so than the energised Keita, who benefited from Porto viewing the threat Sadio Mane posed in front of him as the greater danger and dropping Jesus Corona back to double-mark. 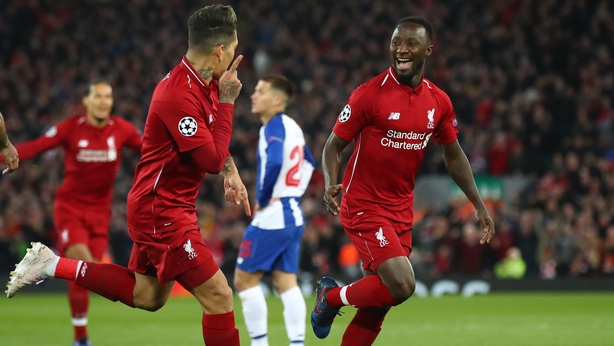 That left the Guinean with more space and time than he gets in the Premier League - and he made the most of it with a fifth-minute goal.

Milner released Mane down the left and his cross was controlled by Firmino to lay-off for Keita to beat Iker Casillas thanks to a deflection off Oliver Torres sending the ball ballooning high into the net.

Keita then teed up Salah for a left-foot volley which was saved by the former Real Madrid goalkeeper, who was subsequently beaten by the Egyptian's gentle shot from an errant backpass which rolled past the post.

Firmino, however, could not miss from a couple of yards out midway through the half when Jordan Henderson's perfectly-weighted through-ball picked out overlapping full-back Alexander-Arnold, who delivered the easiest of crosses.

Since the start of last season, only Cristiano Ronaldo (24) has been directly involved in more goals in the Champions League than Firmino, who has 13 goals and eight assists.

Marega then squandered two chances, the first Alisson saving with his legs, before Keita's searching pass picked out the charging Henderson only for Firmino to blaze over.

Mane thought he had scored the third just after half-time but VAR upheld the assistant referee's decision to flag him offside and from that point Liverpool lost their way somewhat as Porto, who have now not won in any of their 20 visits to England, decided to make a game of it.

They did just enough to suggest the second leg will not be as straightforward as last year's encounter - a goalless draw at Anfield - but having reached the final 13 months ago Liverpool should have enough experience to get the job done having beaten Bayern Munich in Germany last time out.