The campaign to qualify for the 2021 UEFA Women's European Championships might not start until September, but the Republic of Ireland Women’s National Team’s preparations have well and truly begun, according to striker Leanne Kiernan.

Fresh from being named the Senior Women’s Player of the Year at the recent 3 FAI International Awards, Kiernan is back in camp with the squad as they get ready to face Italy in an International friendly on Tuesday.

Speaking from the team’s base in Reggio Emilia, northern Italy, the 19-year-old West Ham United player explained how she was surrounded by her "very supportive" family when she found out she won the top award.

"My parents were over in London for a game that week, so they were with me when I found out I’d won," explained Kiernan.

"To be honest, I was massively shocked, but I’m very thankful. I am really humbled to have won the award. I get a huge amount of support from my family and they were so proud of me winning, so I was really happy for them too."

Hard work and always putting in a strong effort are the key to doing well, according to the county Cavan native when asked what she feels she did to be chosen for the honour.

She said: "I just tried my best and helped the team out as much as I could. Unfortunately, we didn’t qualify from the last campaign. It went well, obviously not well enough for us to qualify, but we learned a lot for the next qualifiers. 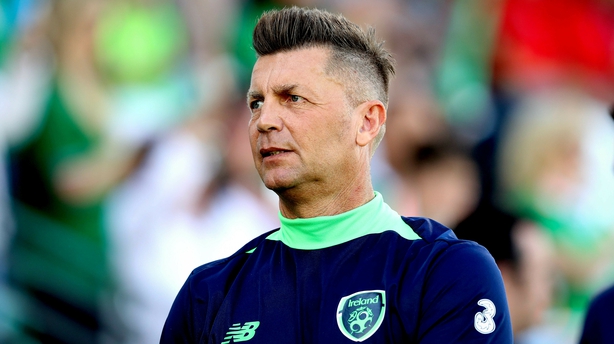 "My team-mates around me helped me out an awful lot, and Colin [Bell, Ireland WNT Head Coach], he’s a big reason for me winning the award and I’m grateful for that.

"All the messages I got congratulating me were lovely, I’ve good team-mates around me and I really appreciate them – I also very much appreciate them giving me the ball to score the goals!"

The last nine months have been very important for Kiernan’s career, as she put pen to paper on a deal with West Ham United in July. And since then, she has gone from strength-to-strength, despite some injury set-backs.

She said: "It’s actually going really well for me. I was just telling Colin the other day, that’s I’m loving it. I’m really am enjoying it.

"The season is coming to an end soon, but I’m very happy to go another season over there. It’s different from at home.

"At home we would have trained in the evenings, but we’re full-time now and we’re in in the mornings and training five or six times a week.

"My team-mates are very good to me too. I was in and out of the team a bit this year with West Ham because of injuries, so my aim now is to get a good season under my belt."

But all thoughts this week are very much on International football as the squad gear up for a huge year ahead.

"We do realise when we’re in for maybe a 10-day camp that we’re getting closer to the European qualifiers and we need to be switched on all the time to get as much as possible out of the time we have together. As Colin says, there’s no such thing as a friendly game; he’s right," said Kiernan.

And with that in mind, the striker explained that she is feeling positive ahead of the game.

She said: "I’m really looking forward to the game against Italy, it’s going to be a tough test against a top seeded team. You want to play the best teams, and for us to get a result would be a big confidence boost going into the qualifiers in September.

"And everybody wants to be in that squad when the time comes so there is good competition in training too, which is healthy. And hopefully we can take what we’ve done in training into the game on Tuesday."