Bayern Munich thrashed Borussia Dortmund 5-0 to take over top spot in the Bundesliga on a landmark night for Robert Lewandowski.

The 100th league instalment of 'Der Klassiker' was a one-sided affair as Mats Hummels, Lewandowski, Javi Martinez and Sergio Gnabry had Bayern in dreamland before the break.

Lewandowski put the gloss on the rout with Bayern's fifth in the final minute and the German champions are now in pole position to reclaim their title.

Bayern were nine points adrift of Dortmund in December, but the Bavarians are now one point clear of their rivals with six games of the season remaining. 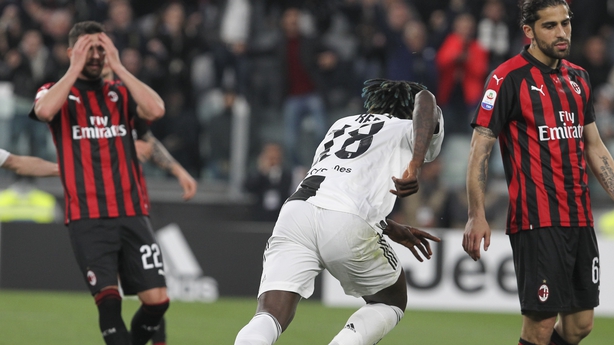 Elsewhere, Moise Kean came off the bench to fire Juventus to the brink of defending their Serie A title in a 2-1 victory over AC Milan in Turin.

Kean was the target of racist abuse at Cagliari on Tuesday in an incident that was significant in bringing the issue of racism in football to the fore this week.

The teenager netted Juve's second goal in that match and he was on hand again against Milan with an 84th-minute winner, after a Paulo Dybala penalty cancelled out Krzysztof Piatek's first-half opener.

The result means second-placed Napoli need to avoid defeat against Genoa on Sunday to keep the Serie A title race alive.