Crystal Palace all but banished any lingering relegation fears as captain Luka Milivojevic fired home a late penalty to secure a 1-0 Premier League victory at Newcastle.

Newcastle were guilty of squandering too many chances and were punished when DeAndre Yedlin fouled Wilfried Zaha in the box in the 80th minute and Milivojevic converted the spot-kick.

Palace held on for their first away win over Newcastle in nine attempts, a run stretching back to 1998.

It lifted Roy Hodgson's side to 12th with 39 points, 11 ahead of third-bottom Cardiff City. Newcastle remained in danger, though, dropping to 15th with 35 points. 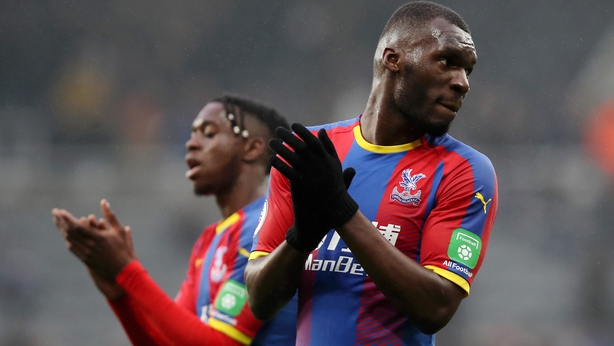 To make matters worse for the hosts they had Florian Lejeune taken off on a stretcher in the second half with a knee injury.

Both sides had goals ruled out in a lively first half with Salomon Rondon denied for the hosts and James Tomkins, who also hobbled off late on, for Palace.

Newcastle had won their last five home games and will be scratching their heads over their failure to pick up at least a point after having the lion's share of chances.

In a desperate attempt to salvage something, Miguel Almiron had a shot blocked by Patrick van Aanholt and Ayoze Perez headed over the bar.

A brace from striker Jamie Vardy gave Leicester City a commanding victory over basement side Huddersfield Town at the John Smith's Stadium in the Premier League.

Youri Tielemans opened the scoring with a long-range strike that came from a Leicester corner in the 24th minute. The Belgian midfielder latched on to Christopher Schindler's poor clearance to curl home a well-placed shot from 20 yards out.

Vardy doubled their lead three minutes after the break when he got on the end of a sublime cross from right back Ricardo Pereira that beat both the defenders, although there was a hint of offside when the striker made his run. 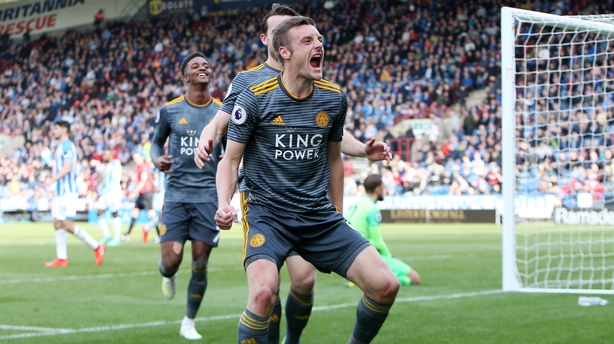 Huddersfield halved the lead four minutes later when midfielder Aaron Mooy converted a penalty after Caglar Soyuncu brought down Karlan Grant inside the box. The Australian sent goalkeeper Kasper Schmeichel the wrong way to make it 2-1.

However, James Maddison restored Leicester's two-goal advantage with a freekick in the 79th minute.

Goalkeeper Ben Hamer misjudged the trajectory and took a step to his right before realising too late that the shot was headed to his left.

Vardy then sealed victory with a penalty five minutes later when Terence Kongolo fouled him after he had rounded the goalkeeper. It was his 104th goal for Leicester, going past former England striker Gary Lineker's haul for the club.

The result moved Brendan Rodgers's side to seventh in the standings with 47 points after 33 games, ahead of Wolverhampton Wanderers on goal difference.

Burnley made a big step towards securing Premier League survival after coming back from a goal down to beat Bournemouth away as their striker Ashley Barnes scored at both ends in an action-packed contest.

The home side took a fourth-minute lead after Barnes headed into his own net but Burnley came roaring back as Chris Wood levelled with an 18th-minute header before Ashley Westwood swept in a shot from 13 metres barely two minutes later. 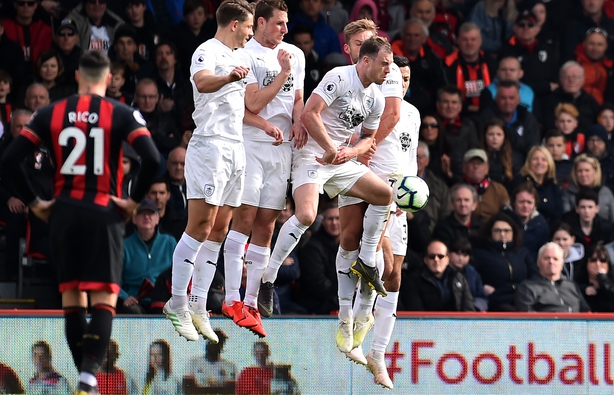 Both goals resulted from sloppy Bournemouth defending as their keeper Asmir Begovic misjudged an inswinging corner for the equaliser before Chris Mepham's poor clearance gave Westwood time and space to fire the visitors ahead.

Callum Wilson missed a gilt-edged chance to equalise midway through the first half when he headed over the bar from close range before another Begovic howler allowed Barnes to score at the right end in the 57th minute.

Wood beat the indecisive Begovic to a deflected cross at the near post, as he turned swiftly and squared the ball back to his strike partner Barnes who rifled it confidently into an empty net from eight metres.