Liverpool manager Jurgen Klopp insists Mohamed Salah's goal-scoring drought does not bother him or the player.

The Egypt international, who scored an incredible 44 times in his maiden campaign at Anfield, has gone eight matches without finding the net.

However, Salah still has 20 for the season and played a pivotal part in the last-gasp winner against Tottenham on Sunday.

"It was an own goal but it was Mo's header which forced it. It felt like it was his goal," said Klopp.

"That Mo was in that situation was off the training ground with a cross from the second ball. I was really pleased when I watched it back.

"People talk about how many games he hasn't scored in but he doesn't seem bothered. It's about work-rate, doing it again and again, and one day the ball will bounce in your direction. We have 79 points - you can't have that if you have major problems in a season."

Klopp added: "His career's not over! It's like if he can score this year 20 goals then he's scored 60 in the last two. Wow, that's not too bad!"

Salah's success last season means he has attracted more attention from opponents in the current campaign, often being double-marked, and that has led to him not being as prolific.

It has had the effect, though, of benefiting team-mates with Sadio Mane (20) and Roberto Firmino (14) taking some of the burden.

"Sometimes you need a bit of time to adapt to the new situations and I don't think he really needed that," added Klopp on Salah's overall value to the side and how he has coped with the close attention.

"He's a threat. He helps us a lot. He deals with all the new situations for him really well.

"If you have only one (goalscorer), you think maybe you rely a bit too much on that. This year we don't rely on Mo's goals, but he's still in a very good position in comparison to all the other players.

"Seventeen (league) goals is a good number, and there are still a lot of games to come." 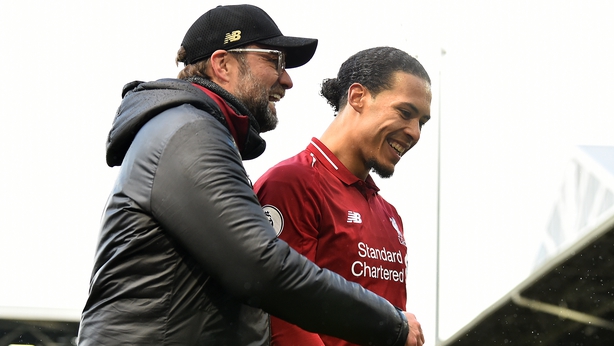 Klopp also offered positive news on the injury front with key defender Virgil Van Dijk (above) showing no after-effects from the knock he took against Spurs.

Van Dijk has been credited for the vast improvement Liverpool have made defensively, keeping 17 clean sheets, which has kept them in the title race.

"I can't say a bad word about him, a brilliant boy. But he knows that you need the boys around you. Defending is team work," he added.

"He is a different player to when he was at Southampton. Champions League quarter-finals, semi-finals and final help you as a player."