Scott McTominay was left wondering how Manchester United conspired to lose at Wolves on a "strange night" for Ole Gunnar Solskjaer's side.

United's Premier League trip to Molineux on Tuesday night ended in a 2-1 defeat, just as their FA Cup quarter-final had 17 days before.

It was a third defeat in four matches for Solskjaer's team and one that few could have foreseen when McTominay scored a superb opener during a bright start.

But United's inability to take their chances came back to haunt them, with Diogo Jota levelling before Ashley Young's second-half red card was followed by Chris Smalling turning into his own net.

Solskjaer's side had twice as many shots as Wolves, with the manner of the loss leaving midfielder McTominay rather shell-shocked.

"It was a strange night," the Scotland international said.

"I was sat with the boys in the changing room thinking: 'How have we not won that game?'

"But goals change games and we were so unfortunate tonight. We played so well in the first half an hour and we didn't quite react as well to their goal as we normally would do.

"For the first hour we were in good nick. We were looking forward, we had so many chances, and the game just changed so quick."

The key moment in the game was Young's sending-off, with the United captain the recipient of referee Mike Dean's 100th Premier League red card.

"I thought we handled it quite well, but it's never easy to go down to 10 men and they can switch the ball and keep it," McTominay told MUTV.

"It was difficult to get pressure on the ball like we did in the first 25 minutes. I did think we started so well tonight and our intentions were clear. 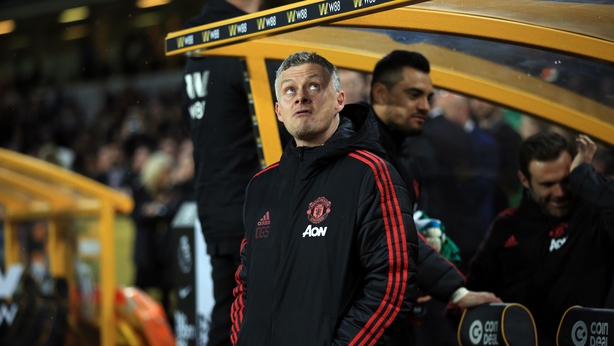 "The way we set out to press them, and they were panicking in the first half whenever they got the ball. It's a difficult one to take, but one we'll reflect on and come back better (for) in the future."

United will have to be far better next week when Barcelona visit in the first leg of their Champions League quarter-final.

McTominay will hope to have impressed enough to be involved against Barca after looking one of the few shining lights at Wolves, where he marked his 41st appearance for the club with a maiden United goal.

"It's so important for you to get off and running for your football club," he added.

"You watch players like (Paul) Scholes and (Michael) Carrick and midfield players like that coming through and that's who you want to emulate.

"But the boys are gutted and it was a tough one to take tonight."

United have the weekend off after losing last month's FA Cup quarter-final to Wolves, who are champing at the bit ahead of their first semi-final in 21 years.

Ahead of taking on Watford at Wembley on Sunday, goalscorer Jota said: "Tonight our performance was good.

"It's hard against a team like Manchester United when they start like that - it requires a lot to come back, but our performance was good and it's a good boost for Sunday.

"Each game is very important for us and we give all the best, every single match. It was just one more game in the Premier League.

"Of course, it was against a great team, but we want to do our job and we are very happy with the result."